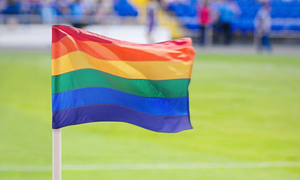 Sports journalist, David Mooney, on LGBT in football and media: “Now there is an opportunity to wipe the slate clean”

In my early-twenties, I would be abrasive towards people who didn’t have the same attitudes as me. I would deliberately try to make an issue out of it. The point was to try to make them truly understand what it felt like to be marginalised because of your sexuality.

I came out to close friends when I was 18. If you’re a famous footballer, you don’t have that option because of the media coverage. Provided that someone is happy, there is no reason to rock the boat. I have a friend who has a great relationship with his Grandparents, but he doesn’t feel the need to tell them he’s gay and they don’t feel the need to ask why he’s never had a girlfriend. There’s a level of understanding between them. He’s happy and they are happy, so what’s the point in changing that?

Famous footballers don't have the option to come out due to the media.

The large majority of Manchester City fans I speak to said that they would love a player in the club to come out. You then get maybe one in 30 who said that they wouldn’t be happy about it.  Manchester City’s fans are like any other club in the Premier League, so to me there doesn’t seem to be a problem. The vast majority of football fans would be fine and quite respectful, with only a small amount being bigoted. So are we really just pandering to a tiny minority who have an issue with it?

Many homosexual teenagers who are put off pursuing their dreams because of the masculine culture in football, especially in the dressing room. In many respects, I’m very fortune in that I was terrible at football, as I never entered that dressing room environment where there was the ‘locker room banter.’ When Donald Trump’s "grab them by the pussy" saga hit last year, people would act disgusted and say it’s unheard of in the locker-room environment. But I’ve personally heard that sort of talk. I've sat there rather uncomfortably when those things are said. It happens all the time, it’s definitely there.

People actually think that a player’s sexuality could impact their playing ability. But, speaking as someone who has slept with different men over my lifetime, I can tell you that it does not cause me any problems playing football. Only my own limitations as an athlete are affective of that. A player’s sexual orientation doesn’t influence how well they play football.

If a player were to come out now, it has to be front-page news. Headlines shapes what people are talking about. It has to be, therefore, respectful. I believe that people are wiser than the press give them credit for. We need to move away from the lowest common denominator. When a gay footballer comes out, if you’re disrespectful, what the ramifications of that? If you splash it, sensationalise it, you might sell some more newspapers, but what does that do for society?  Are we not better than that?

There has been progression of some sort. Paddy Power were the first to promote the Rainbow Laces weekend, but unfortunately they undermined the whole campaign with the ‘#rightbehindgayfootballers’ hashtag, which made it completely sexualised. It says ‘let’s have a laugh at the expense of the gay community.’ In general it’s a good idea, but it was done very badly by them. There is a line. If joke is played on somebody which isn’t based on an uncontrollable individual characteristic, that’s one thing. But if the joke is about who people are sleeping with or who they fancy, it becomes much more personal and, in essence, it becomes bullying.

The press also need to understand the power of the words of which they are saying. It isn’t damaging on one instance, but when it’s repeated again and again it forms an unconscious opinion into the minds of others. Such as when George Michael passed away on Christmas Day and the press referred to his partner as ‘lover’. Right, so when you are gay you have lovers and when you are straight you have partners? It just insinuates sleaze.

Another instance is the coverage of Tom Daley and Dustin Black. There is never a reported piece which doesn’t mention the age difference between the two. It makes it almost a scandal, when in fact it’s a normal relationship between two consenting adults.

I can tell you now, my relationship with my boyfriend is no different to those in a heterosexual relationship: he’s my boyfriend, he’s my partner, and he’s my other half. There’s no difference between what me and him do and what other people do in their relationship. There’s scrutiny of famous gay people that wouldn’t exist if they were straight and that can make it tough for gay footballers. But now, I feel there is an opportunity to wipe the slate clean and say ‘we fucked it up last time, let’s not make that mistake again.’