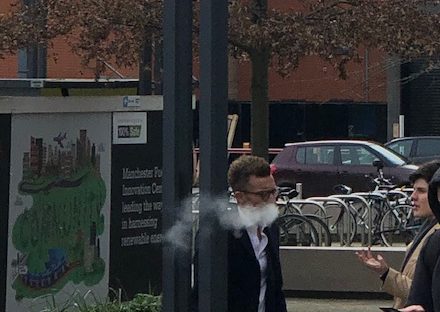 Manchester prefers cigarettes over vaping because of health fears

Students are choosing to smoke cigarettes over vaping due to concerns about the unknown, long-term effects of vaping.

Kash Govin, owner of a convenience store on Oxford Road in Manchester’s university quarter, said that the majority of students are still buying cigarettes over vaping fluid.

He estimated the number of students who buy cigarettes is still “10 to 1”, adding that that “students lean more towards the fruitier flavours of vapes”.

Though there is controversy over the unknown effects of vaping, the NHS released a report in 2019 suggesting that the use of e-cigarettes is healthier than smoking. But it seems the unknown is still the repellent aspect of vaping.

Speaking to the Sun, Dr Scott of Birmingham university that “marketing was geared towards younger users with flavours named after the sweet brand Skittles, and fruity flavours”.

He also said “the US took up e-cigarettes before the UK and they are a look at the future for us. In America, 40% of kids have tried them by 18”.

We spoke to Molly Hill, 21, a student at MMU who is trying to quit smoking. She does not want to commit to vaping because she is unsure of the effects it may have being a relatively new phenomenon.

“At least with smoking, you know the long term effects,” she said.

“Vaping is unpredictable” but she acknowledged that it “tastes nicer and smells better”.

In November 2019, The Guardian published an article about Ewan Fisher, a teenager who suffered from a life-threatening respiratory failure due to the effects of vaping. As a result he was put on two different life support systems and under intensive care. He had only been vaping for three months.

According to the Government of Canada official website, the results of vaping in young teens has a cause for greater health risks compared to an adults. It can affect memory, concentration, brain development and can reduce impulse control.

Nicotine in a liquid form is poisonous, particularly to children, if it is swallowed or absorbed through the skin. There have been fatalities as well as non-fatal nicotine poisoning caused by children swallowing vaping liquid.