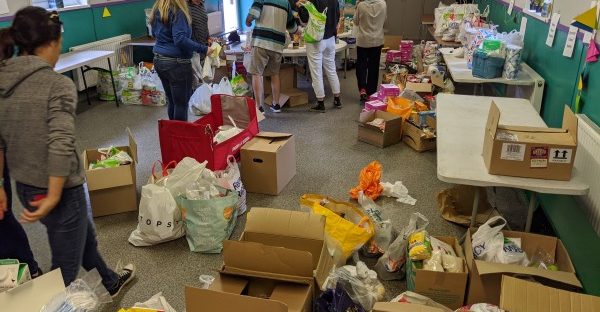 The cut to the £20-a-week increase to Universal Credit has left families in a vulnerable state and reliant on foodbanks to get by, it is claimed.

Research conducted by the Trussel Trust indicates that tens of thousands of people are seeking support from food banks since the start of the pandemic, with families with children being hit the hardest.

Meals provided by Oldham food bank to local people in crisis is rising year on year. In 2017, 5867 meals were provided to local people, with 2790 of these meals going to children and young people.

In 2018 the overall number of meals rose to 8048. After the Covid-19 pandemic,and the withdrawal of the £20 Universal Credit at the start of October, more families have been left in a vulnerable state, say campaigners.

Father Tom Davis, the parish priest of St Margarets Church in Oldham, said: “People are beginning to feel the pinch of not having that (Universal Credit) money.

“People had gotten used to it and had come to rely on it and now it’s being withdrawn.

“I think it’s put people between a rock and a hard place, because it’s a lot of money to these people”.

He said the impact on families receiving the  uplift has been huge. Families accessing Oldham foodbank has risen dramatically, and it has provided 148 meals in the space of three days.

Anti-poverty campaigners and MPs warned that cutting the £20 weekly increase could spell a financial crisis for millions of families across the UK.

Six former Conservative welfare secretaries wrote to Chancellor Rishi Sunak urging him to extend the weekly increase further to avoid a financial cliff-edge for many families.

Around one in five of people in the UK today live below the poverty line and cannot afford living essentials such as housing, energy and food.

Prime Minister Boris Johnson has said: “My preference is for people to see their wages rise through their efforts rather than through taxation of other people put into their pay packets.”

Research has shown that the UK’s welfare system is pushing a record number of working people into poverty.

The Joseph Rowntree Foundation found that eight in ten people claiming universal credit at the beginning of 2021 were either in work or looking for work.

Father Davis does not believe the rise of the national minimum wage will have much of an impact on struggling families and questions how much of the increase people will see and how much people will be taxed.