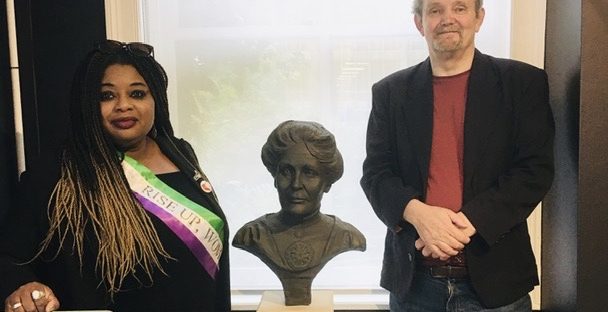 Feminist activists united in a global 24 hour edit-a-thon on Ada Lovelace Day to combat what they say is a content gender gap on Wikipedia.

During the event they created and edited articles about women and non-binary people.

A total of 3,430 total edits were made during the event and 113 new biographies about women were published.

So what happened at this 24hr editathon that we were wittering on abt? The one in NZ, AU, Pakistan, Scotland, Kenya, England, Ghana and the US?

Over 70 editors created over 110 articles which have been read > 8000 times so far. Making a difference.https://t.co/c7SnIn5iik pic.twitter.com/vgHNgOPbBI

Co-founder of Wiki Women In Red, Roger Bamkin, and Pankhurst Centre Ambassador Carol Ann Whitehead led the live training event in Manchester which was attended online by more than 40 people.

During the event, 77 new editors were recruited including Ailsa Holland, co-author of On This Day She, a history book which exclusively includes women.

She said: “A lot of the women we’re adding in to Wikipedia today will be women that otherwise we’d have no chance of hearing of.”

The women added to Wikipedia during the edit-a-thon include Fajer Rabia Pasha, a Pakistani activist and entrepreneur who moved to Manchester in 2003.

She founded the social enterprise Inspired Sisters which supports the local community in Longsight by aiming to reduce social exclusion and overcome isolation.

When hearing she had been added to Wikipedia, Fajer Rabia Pasha said: “This has been amazing as on personal level I never had the time to do this.

“So when I was informed that my profile has been updated I was really pleased.”

Since Wiki Women in Red was founded in 2015, the percentage of Wikipedia articles about women has raised from 15% to 19%. Of the 1.8m biographies on Wikipedia, only 350,000 are about women.

Each activist has a similar story as to why they are taking part in the edit-a-thon.

Roger Bamkin founded Wiki Women in Red after writing an article about an 1840s anti slavery conference which didn’t allow women in. Ailsa Holland conceived the idea for On This Day She after realising her On This Day In History calendar featured no women.

We already are changing the world

Mahwish Afridi, who led the event in Pakistan created a sister project in collaboration with Wiki Women in Red last year after searching Wikipedia for Pakistani business women and finding only four results.

Members of Wiki Women in Red and their 30 sister projects are solely run by volunteers.

Bamkin said: “It’s incredible that 100,000 meet together on the internet and organise themselves. Because we have misogynists, we have idiots, we have looneys but we manage to control them.”

Pankhurst Centre Ambassador, Carol Ann Whitehead, said: “Wikipedia is a global encyclopaedia. Everybody goes to Wikipedia to get information and the population isn’t 19% women. So the pages have to reflect that.”

She remains determined adding: “We’re going to change the world. We already are changing the world.”

Wiki Women in Red are continuing to focus on women’s rights as part of a year-long initiative.