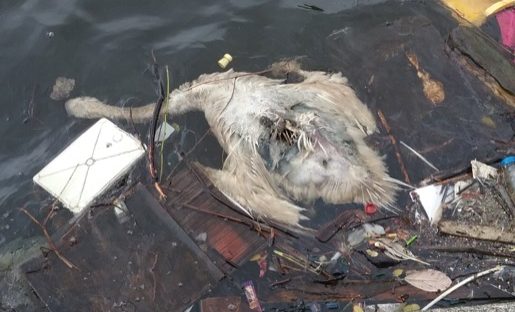 Shocking pictures have emerged of dead swans floating among piles of rubbish in the water at Salford Quays.

The disturbing images clearly show swans surrounded by debris and discarded plastics in the central bay of Salford Quays used for watersports.

The bay is used for open swimming and other water sports by users at Helly Hansen Watersports Centre.

Resident Jennifer Jamieson took the pictures whilst walking through Salford Quays and noticed the dead swans in the polluted water. In one of the pictures a swan lies floating beneath a kayak.

She tried wthout success to find out what happened to the swans to cause their deaths.

Jennifer said: “I told the water sports centre that they had two dead swans outside but they didn’t have a clue. I also contacted the RSPCA who told me that they’re finding a lot of dead fowl because of the pollution.”

Salford City Council told the Northern Quota that the owner of the waters are responsible for all dead fowl.

A spokesperson said “The waters at Salford Quays are owned by a number of different parties. The two dead swans were reported to us in water owned by the Peel Group. Their officers dealt with them.”

They also confirmed that the waters used by the water sports centre should not be affected by the pollution and said the centre is “kept to a very high standard to provide safe, clean water for people to enjoy themselves”.

A spokesperson for the water sports centre they had reported the incident to the RSPCA but made no comment on the polluted water.

A senior conservation officer from The Wildlife Trust for Greater Manchester said “It is possible that these swans have eaten some discarded food or litter that has been thrown into the Quay.”