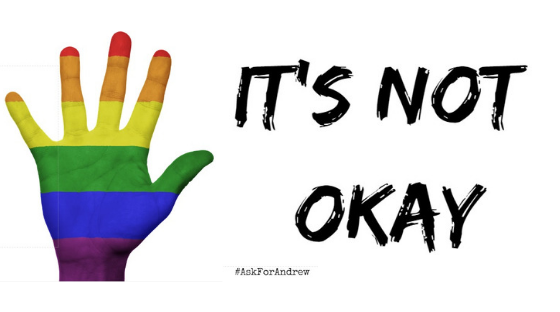 #AskForAndrew Campaign set up to help gay men in Manchester

There is a cultural acceptance amongst gay men notably that this sort of behavior is acceptable.

The aim of #AskForAndrew is to give the LGBT+ community a safe way of letting others know that they feel they are in danger or a victim of sexual assault without drawing attention to themselves, in order to get the help and support they need from bar staff. They can do this simply by ‘Asking for Andrew’ letting staff know through the use of this safe word system, similar to Ask for Angela.

#AskForAndrew wants Manchester clubs and pubs along Canal Street in The Village, to embrace the cause and to do more for victims of sexual assault, to work together to stamp out any form of sexual assault agaisnt gay men and overall to make the area safer.

Wanting a safer area to call the heart of the Mancunian LGBT community should be a key priority and by having your voice heard and signing this petition we are one step closer to achieving this goal.