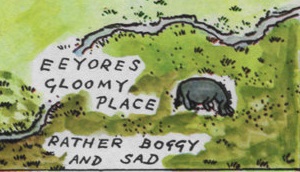 February 4 2016 is Time To Talk Day, a day dedicated to removing the misconceptions surrounding the mental health issues that affect one in 4.

This made me think about my own mental health. It’s hard to admit you need help. It’s hard to draw on your own experiences. It’s hard to talk about something that has negative connotations surrounding it. And that’s exactly why I’m choosing to write about it now, because keeping quiet adds to the idea that mental health is something to be ashamed of.

This was cemented by the following text from a friend: “The thing that annoys me about depression is you can’t have a day off work because they’ll think it’s BS.”

It’s a sad but true statement that many of us with depression have faced: other people's ideas about depression and how they think you should be affected.

In 2012, aged 19, I was diagnosed with depression and an anxiety disorder.  I had gone to the GP with a seemingly unrelated list of symptoms and read them out, voice wavering. I didn’t look her in the eye until I reached the last item, to which she looked at me and asked: “Do you think you might be suffering with depression?”

I responded by bursting into tears, largely in part because I didn’t want to have something wrong with my mind. I went home afterwards and greeted my mum with the blunt phrase: “I’m depressed and I need therapy.”

I was given antidepressants and put on a waiting list for cognitive behavioural therapy. I didn’t want therapy at the time, largely due to my own ignorant preconceptions about it. After all, only crazy people needed therapy, right?

Wrong. I bonded with my therapist straight away. She made me feel at ease and concluded – based on our sessions – that I had actually been suffering with depression and anxiety a lot longer than I had thought, estimating that they’d been in my life since I was about 13. Not due to my father’s unexpected death, as a lot of people assumed.

After discussing a lot of my upbringing and childhood with my therapist, we thought these things were possibly the main contributor to my anxiety disorder. The depression was a different story, and if I’m honest, I didn’t see a future without it because it’s been quite prevalent in my family.

I continued to take antidepressants, my prescription changing when I felt like that variety no longer helped. Medication made me feel as though I was sick, admitting that something was wrong with me. It was only when the fog lifted that I realised just how different I could feel and I began to accept things. When I ran out of citalopram, I stopped taking them. I had been discharged from therapy long before, as my therapist was satisfied that I had improved.

Over time I slipped back into the pit of depression. I knew that I was back there and yet I didn’t want to admit ‘I had lost control.’ It was only when I found myself skipping lectures to avoid panic attacks and coming home to do little more than sit in one spot and wallow that I really realised I was there. I hit an all-time low the day I broke down over a trivial matter and felt as though I wanted to walk out into heavy traffic.

It had been a long time since I had felt suicidal, something that I didn’t ever tell doctors, or even most of my family because ‘I didn’t want to seem crazy’. I was fine – on the surface. People with depression can be like that because they don’t want to give away any hint that they are Not Okay.

There were a lot of days where I wouldn’t leave the house, stay in my pyjamas and realise I hadn’t showered for a few days. Time had no concept and I felt as though as I was just sitting around for one day to end, only to repeat the cycle.

People describe it as feeling like a zombie for good reason. When I wasn’t sat about crying over everything, I felt nothing. I had no emotions beyond feeling numb. Nothing mattered anymore. Some days, I wouldn’t even leave my bed, which in turn would make me feel even worse; like I should feel guilty for being depressed. I felt guilty about the way this must have affected my partner; surely he deserved someone who could get up and function? I hated myself for feeling so self-centred.

Only a couple of people knew about my depression. These same people later confided they had been affected by depression but didn’t want to tell me because they didn’t want to make mine any worse. They eventually did because they didn't know anyone else who had also suffered. Depression isn’t the same for everyone, and I started to actually talk about my own because of them. I had rarely addressed it at this point, believing that if I acknowledged it, then it was winning.

The few people I chose to tell were amazing about it. Not one of them treated me any less or said: ‘What do you have to be depressed about?’; ‘You don’t look depressed.’ I was worried that people would treat me differently just because my brain didn’t work as it should. I was fine; my brain was the one that was sick. In reality, I discovered that more people I knew had had some experience of depression or anxiety.

I feel like I should add that I no longer take antidepressants, and I’ve noticed that I can now do things I once couldn’t because of anxiety. More recently, I noticed a pattern that correlated my worst days when my hormone levels peak.

That was possibly the biggest thing for me: on a ‘down’ day where suicidal thoughts still creep in and I think maybe that depression is returning, I look for the pattern and realise this time it’s only temporary. Now I can luckily appreciate knowing the cloud will pass after a few days.

I’m not alone, although I wrongly thought I was. Depression and anxiety are only two of many mental health issues, some that people are scared to mention, for fear of judgement.

Mental health issues, in any form, can affect everyone. There’s nothing to be embarrassed or ashamed about because, chances are that you know someone who also has one.

The only way to remove the stigma is by talking about it.

For more information and support: