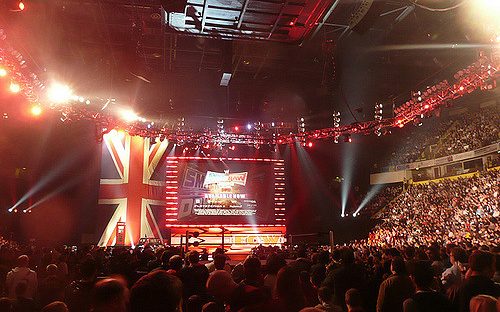 NQ's Adnan Riaz gives his opinion on how the UK wrestling scene will be affected by the arrival of the WWE's maiden UK Championship Tournament.

During a press conference hosted at London’s O2 Arena last month, WWE’s executive vice president of Talent, Live Events and Creative, Paul ‘Triple H’ Levesque, took to the stage to make a game-changing announcement. In January 2017, the WWE will be hosting the first-ever United Kingdom Championship Tournament, a 16-man competition set to take place at Blackpool’s Empress Ballroom across two days. At that event, which will be aired on the WWE Network, one of the 16 British competitors will be crowned the inaugural WWE United Kingdom Champion.

It’s hardly surprising that the WWE is branching out with the UK Championship Tournament after the success of its 32-man Cruiserweight Classic tournament in 2016. Warmly welcomed by fans and critics, the CWC helped to stimulate the re-launch of the cruiserweight division in the WWE. Not only did the CWC have fantastic commentary provided by Mauro Ranallo and Daniel Bryan, but the competitors also showcased wrestling styles revered around the world, ranging from lucha libre to strong style. Now, the cruiserweights have a presence on both WWE’s flagship program, Monday Night Raw, and their own exclusive show on the WWE Network, 205 Live.

While the UK Championship Tournament’s not on the same level as the CWC, narrowing its scope to focus on British talent can only result in positive exposure for the UK indie scene. Okay, the Championship Tournament might be missing the likes of Zack Sabre Jr, El Ligero and Drew Galloway, but it’s not taking away from other superstars, who have established their reputations in the independent circuit, to burst onto the scene in WWE. Not only will the Championship Tournament expand WWE’s live programming and its sphere of influence in the UK, but it’s also a monumental stepping-stone for forging stronger ties between the world’s largest wrestling corporation and independent promotions.

Irish-born wrestler Fergal Devitt, better known as Finn Bálor, believes that the UK Championship Tournament will ‘supercharge the United Kingdom and Irish wrestling scene’. Bálor, who arrived in the WWE in 2014 and became the inaugural WWE Universal Champion in 2016, added: ‘But more importantly, this is going to bridge the gap between independent wrestling and the WWE — something that has never been done before’. Bálor’s not the only one relishing in the WWE’s new UK-developed program. Even former WWE superstar Wade Barrett took to Twitter, saying that it’s a ‘great time to be a British wrestler.’

It truly is a historic milestone for wrestling fans, especially British ones, and it’s not being sugarcoated for the sake of a new product launch. The WWE isn’t ready to commit a crusade against British independent wrestling like Vince McMahon did against U.S. territorial promotions in the 1980s. Just as the WWE has had success with its developmental division, NXT, in the States, it doesn’t necessarily need another one to spring up in the UK. Independent wrestling has already established a plethora of British talent locally, regionally and nationally, but the WWE is now in a position to scout out those names and elevate their reputations on a worldwide scale.

Manchester’s no stranger to wrestling and, like the rest of the UK, it can only benefit from WWE’s Championship Tournament. The WWE has visited the city countless times to tape episodes of Raw and SmackDown, but Manchester also has its own independent wrestling promotions. One of those promotions is FutureShock Wrestling, which has warmly embraced the magnitude of the Championship Tournament’s announcement. The Manchester-based promotion tweeted that WWE’s William Regal was ‘backstage at our July show seeing what our fighting men & women can do’, adding a final teasing comment of ‘Feel free to speculate’.

FutureShock, much like other indie promotions, is relishing about the prospects of the UK Championship Tournament due to the participants featuring in it. Former FutureShock Champion Tyson T Bone and former Adrenaline Champion James Drake are part of the competition’s 16-man roster. It’s an opportunity for promotions like FutureShock to raise their reputation not only from a regional level, but nationally and worldwide, too. With that being said, it’s important for the WWE to acknowledge the independent promotions each wrestler has come from during the Championship Tournament. Welding the bridge between the WWE and the UK indie scene must start here, instead of FutureShock, for example, being a mere breeding farm for the WWE to cherry-pick what it likes.

For Manchester, independent wrestling prospered in the form of a breakthrough star arriving in the WWE in 2016. Former FutureShock Champion Jack Gallagher became the second Manchester-born star, the first being Les Thornton, to sign for the WWE. Gallagher, real name Jack Claffey, has made appearances on the Cruiserweight Classic, 205 Live and is an active member of the Raw roster.

Although the UK Championship Tournament is an all-male competition, it shouldn’t deter the fact that the WWE probably has big plans for female British wrestlers. At this moment in time, the WWE has never had a better women’s division. It’s not an opinion; it’s simply fact. Women are no longer being objectified in ‘Bra and Panties’ matches or lingerie-modelling competitions. It’s rather an era of seeing the women’s division deliver exhilarating matches and, in the case of Sasha Banks and Charlotte Flair, setting historical milestones after milestones in the WWE.

The WWE has seen its fair share of UK talent coming in the form of Paige and Becky Lynch, though the ‘Women’s Revolution’ in WWE is still a work in progress. It won’t be long before the women have their own ladder match at the Money in the Bank pay-per-view, for example. Additionally, the WWE apparently has plans for a women's tournament in the style of the CWC. If that’s the case, then a female British wrestler could be participating in the tournament. The British wrestling scene is stronger than it has been in recent years. With the rise of WhatCulture Professional Wrestling, its ability to attract big-name stars and have live shows across the UK, it’s the perfect time for the WWE to expand even further into this territory. Even ITV recently brought back World of Sport Wrestling for a one-off special, 30 years after it originally ended.

Triple H said that the UK Championship Tournament is only the first step in WWE’s plans, saying the company’s long-term vision includes a brand-new weekly show produced in the UK. Content that is tailored to a UK audience is welcomed, and with it offering more exposure to British wrestlers, it can only benefit the longevity of independent wrestling promotions.

The WWE United Kingdom Championship Tournament takes place on the 14th and 15th January exclusively on the WWE Network.