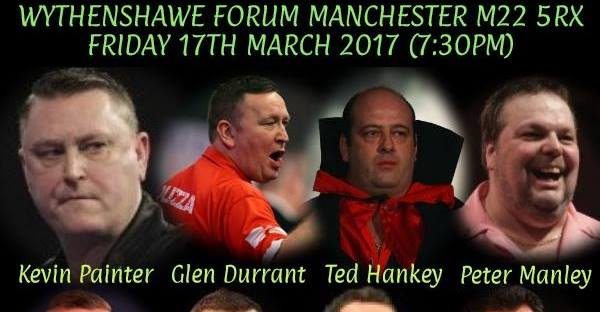 Since 2011 Martin has hosted the cricket club's annual beer festival to help raise funds for the small, yet picturesque Ashley Cricket Club. Now he's upping the game by bringing in professional darts players, including the current world number one, and BDO World Champion, Glen Durrant. Glen is even bringing his trophy with him!

Glen Durrant isn't the only darts star to look out for at the event. Martin told The NQ: "We also have two former World Champions in Ted Hankey and Dennis Priestley, and former PDC Premier League players in Kevin Painter and Wes Newton. Peter Manley is one of the biggest characters in Darts.

Completing the lineup, is Stuart Kellett, a World Masters Finalist in both the PDC and BDO, and Nathan Aspinall, who recently won the PDC Development Tour 2 years ago.

This fantastic line-up of players is sure to set the night up for a great competition between darts heavyweights.

The event is to take place in Wythenshawe Forum on St. Patrick's Day (Friday, March 17).

Speaking about the event's date, Martin told The NQ: "We hope the crowd will be extra lively, there will be a real mix of true darts fans who follow the sport the length of the country and those coming to an event for the first time.

"There are 25 people travelling all the way from Rugby and  a number of local businesses treating their staff to a night out."

Speaking about previous events that he's hosted to raise money for the local cricket club, Martin said: "We ran our last darts event in 2015, it was held at Altrincham FC Community Sports Hall.

"The event went like a dream, we had Bobby George, one of the most well known and characteristic darts players ever, Colin Lloyd, Colin Osborne, Kevin Painter, Mark McGeeney, Stuart Kellett pitting themselves against two local qualifiers. Kevin Painter was the winner, he came to the after party and drank till 2am before retiring to his hotel!"

Martin's genuine love for his local community, based around the cricket club, was the inspiration for organising the charity event. Martin added: "Ashley Cricket Club is a small village cricket club based near Tatton Park.

"It is an old fashioned cricket club in every sense of the word, it is set in one of the most picturesque areas of Cheshire, it is a club with little resource but a big heart. It has 6 senior teams and nearly 80 juniors playing from the Railway Field.

"Running a sports club gets more and more expensive every year. The club had held the usual fundraisers, quiz nights, etc., but it was not raising enough money to cover its expenses. At that point I decided to organise the club's beer festival which has now been an annual event since 2011.

"I came up with the darts idea after meeting several darts players and holding a lot of small competitions in the local area."

Tickets for Friday Night at the Forum are £15, and can be purchased here. For more information visit the event's official Facebook page.