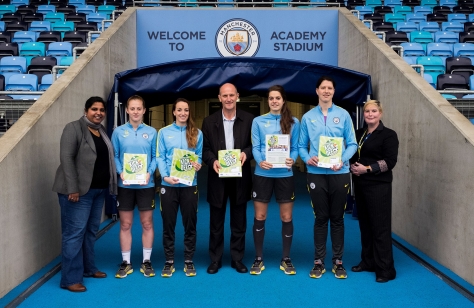 A new language scheme is being backed by the stars of Manchester City Women’s FC.

The Language League: Kick Off scheme offers pupils a chance to develop language skills in a fun way by linking learning with football.

It has been launched by Manchester Metropolitan University and is targeting 3,000 schools in the North West.

The initiative  aims to get more schoolchildren learning French, German, Arabic and Spanish.

Players from Manchester City Women’s FC were on hand to launch the new scheme and talked about how languages in today’s football play an important role.

Midfielder Tessel Middag, from Holland, was one of the players to help launch the innovative scheme.

“The most exciting thing is to be able to communicate with other people, especially my teammates.”

“We have so many different nationalities in the dressing room that it is important to interact with all of our teammates,.” she said.

Marie Hourihan, the English goalkeeper in the squad, thinks learning a new language is essential for youngsters.

“In terms of their longer-term prospects, if they want to work abroad or visit another country and if you can learn it when you’re younger it’s a brilliant skill to have,” Marie said.

The Language League: Kick Off toolkits are available from MMU and include interactive football-themed language lessons aimed at encouraging youngsters to study languages in school.

Learning a language is compulsory for all children between seven and 11.

Yasmin Hussain,  project  manager of Routes into Languages North West, said: “We are seeing a new language become a normal part of children’s learning from the beginning of their primary education.

“The Language League: Kick Off will provide classroom resources to help teachers and pupils on this language journey.”