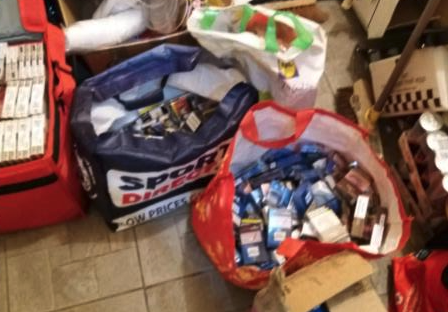 ‘A toxic cocktail of chemicals’: sniffer dog seeks out 5kg of illegal tobacco

A sniffer dog has found 5kg of illegal tobacco after a routine inspection by police.

The tobacco was found in the form of 13,050 cigarettes and 4.5kg of rolling tobacco, hidden in the rear storeroom of Superstore and on a hidden shelf.

The illegal tobacco was seized by the police.

Andrea Crossfield, making smoking history lead at the Greater Manchester health and social care partnership, said: “Illegal tobacco might seem like a bargain but it comes at a high price to our kids and our communities.

“Legal or illegal, all tobacco contains a toxic cocktail of chemicals which will kill one in two long-term smokers.

“Illegal cigarettes are often responsible for getting children started on this lethal addiction, because of their availibility at pocket money prices and because dealers don’t care who they sell to.

“The crackdown on illegal tobacco is part of wider efforts to cut smoking rates and make smoking history for future generations.”

Both Dulovi and the company pleaded guilty to all offences on 27 January.

He was sentenced to a 12-month community order requiring him to carry out 60 hours of unpaid work. He was also ordered to pay costs of £329, and a victim surcharge of £95.

Councillor Rabnawaz Akbar, executive member for neighbourhooods said: “Getting illicit tobacco off our streets and punishing those responsible for selling it sends a clear message that as a council we will take clear and decisive action to protect the health of our residents.

“I’m grateful to our trading standards service, legal team and of course Mollie the dog who were able to secure this latest conviction.”