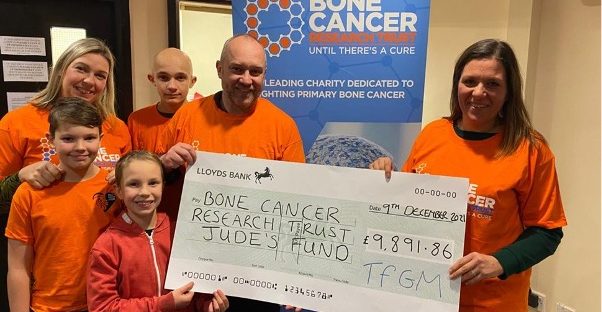 A dad has helped raise nearly £20k for charity during the pandemic in memory of his son.

BCRT has become one of TfGM’s corporate charities, in memory of the life and fundraising efforts of Jude Anderton, whose father Paul works within the organisation’s road safety team.

Jude, 12, was diagnosed with osteosarcoma in April 2017 after feeling pain in his arm.

He dedicated the rest of his life to raise money for bone cancer research to help others receive better treatment in the future, with Jude’s Fund raising more than £215,000 for the charity.

Paul said: “I would like to thank everyone at TfGM who has helped to raise this fantastic amount for The Bone Cancer Research Trust in memory of my beloved Jude.

“To raise such an amount especially during the pandemic is a real testament to the work and dedication of the fundraising committee and the generosity of everyone at TfGM who took part in all the fundraising activities.

“I am also grateful to those colleagues who have adopted BCRT as one of their personal charities and who continue to raise vital funds for the charity.”

Kate Connor,  community fundraising  manager for BCRT said: “We can’t thank everyone at TfGM enough for their amazing fundraising in memory of Jude Anderton over the last three years.

“They have overcome such trying circumstances to raise enough to fund an absolutely incredible 330 hours of bone cancer research and it could well be their fundraising that leads to the breakthrough we all so desperately hope comes soon.”

Joanna Huddart, fundraising manager at Manchester Mind said: “Manchester Mind is proud to have received TfGM’s support over the last three years, not only through fantastic fundraising efforts but also the enthusiasm of colleagues to attend our onsite mindfulness sessions.

“While we’ve not been able to come together in recent times, we’ve certainly achieved a lot in solidarity and community spirit, and for this our charity could not be more grateful. Thank you for being there for our local mental health services and the people of Manchester.”

Jude’s parents have continued in efforts to raise money for bone cancer since Jude’s death in 2018.

His mother Helen added: “What he went through was horrific. There has to be a way to give children gentler, less gruelling treatments.

“He received the same treatment for bone cancer as children in the 1970s. Treatment hasn’t moved on or improved for 40 years. That’s just not good enough.”