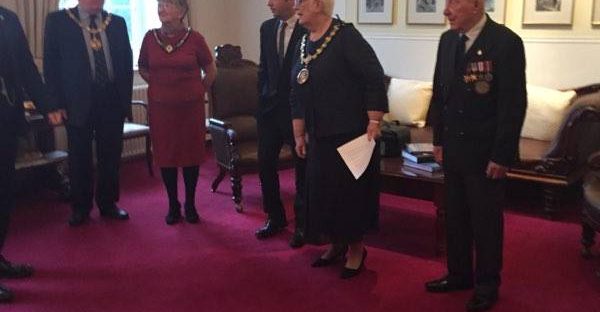 A 91-year-old war veteran from Pendlebury has been presented with France’s highest honour  – the Knight of the Legion of Honour – in recognition of his role liberating France from Nazi rule during WWII .

Joseph Thomas was given the title of Chevalier de l’Ordre de la Légion d’Honneur by the French consul, Monsieur Rodolphe Soulard, in a ceremony at Swinton Town Hall.

Thomas joined the Royal Navy at the age of 18 in 1943. He was involved in the Operation Dragoon landings which helped to liberate France in August 1944 by securing ports on the country’s south coast and weakening German forces.

Monsieur Soulard said: “You are a living witness to the history you wrote on our soil, a history which shaped the identity of Britain and France. You are a great example for me, for young people, for our countries and for Europe. The Nazis tried to eliminate freedom but did not reckon with the incredible strength of women and men.”

Mr Thomas talked about how proud he felt to receive the honour, and of his memories of serving in the war.

“It’s hard to find an adjective to describe how I feel, it’s just amazing really”

“I was just one member of the crew of a ship. The relationship between servicemen for the short time they’re together, is unbelievably quick and fast. It’s something that you never experience in civil life because you rely so much on each other in difficult situations.”

Mr Thomas’s granddaughter, Kate Lohan, spoke of her pride at watching her grandfather receive the prestigious honour, along with other family members.

She said: “We’re immensely proud of my Grandad. The contribution that he made to the war is staggering, as is that of his comrades. It’s easy to take for granted that it all “just happened” and it’s hard to even imagine now how it must have felt to leave your family and friends and not know if you’d ever see them again.”

Along with the French consul, the mayor of Salford was also in attendance and hosted the ceremony. Local veterans from Swinton and Pendlebury also attended to show support.

Despite being 91, Mr Thomas is full of energy and vigour with a positive outlook on life, recently flying a plane over the Irish sea, and says he would love to one day drive a steam train.

“It fills my heart with joy when I see him with my two-year-old daughter who totally adores her ‘GG Joe’,” said Kate.

“Despite his 91-year-age tag, he plays football with her, swings her around, dances with her and runs around the park after her – it’s not difficult to see why she comes running, shouting his name when he arrives!

“Our family couldn’t be more proud of the man he is and the contributions he made to the course of history, as well as to our family’s successes and the community that he lives and worked in.”