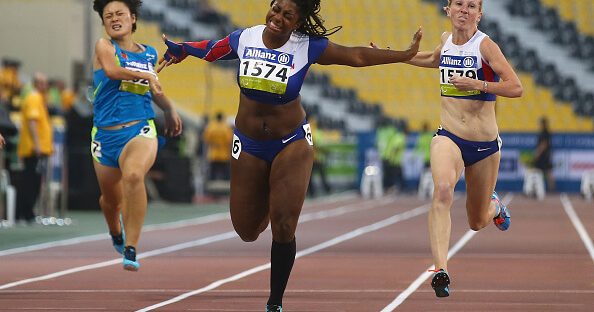 MMU Sports Scholars will be competing for medals on the track, in the velodrome and in the pool at this year’s Paralympics starting on 7th September.

Kadeena Cox (@kad_c) is a 25-year-old Physiotherapy undergraduate hoping for three medals when she doubles up in Rio to compete in track cycling and athletics. No British athlete since 1988 has managed to win medals in two different disciplines at the same Games so she’s hoping to make history.

Helen Scott (@Scottie2507), 26, is a track cyclist who already knows what it’s like to win Paralympic medals having won a silver and bronze in London 2012. In Rio, she’ll be piloting partially sighted teammate, Sophie Thornhill, in the tandem. Helen is studying for her BSc Sport and Exercise Science

Tully Kearney (@TullyKearney), 19, trains at the Manchester Aquatic Centre on Oxford Road, and is studying Physiology. She’s a four-time world champion and made it to the final three of the BBC’s Young Sports Personality of the Year in 2015.

Another MMU student, Holly Bradshaw (@HollyBleasdale) will be representing TeamGB in the pole vault at the Olympics later this month. Although 24-year-old Holly now trains in Cardiff, she continues her MMU degree in Sport Exercise and Science through distance learning.

MMU’s Performance Sports Officer, Callum Jones, says the demands of being an elite athlete and a full time student should not be underestimated.

“It’s about their mental fortitude to be able to balance both of those significant commitments. It says a lot about their character and persistence,” he said.

“But we’re fortunate that our Olympians and Paralympians are really conscientious students so if they’re having a problem, they will engage with us and we can put things in place to accommodate their training schedules.

“I’d say to every MMU student, look out for these athletes as they’re competing in Rio this year. Get behind them on social media. Show them the entire university is behind them!”