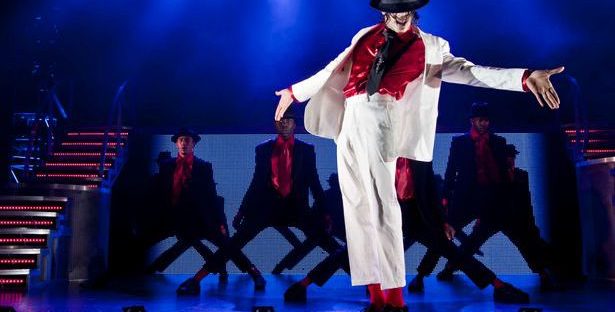 Thriller Live is a collaboration and celebration of Michael Jackson’s life and music. Rather than a musical, it’s more like a mixture of a concert and a cabaret that six lead singers recreate, taking their own spins on the songs. Including some of Michaels non-stop hits like I Want You Back, ABC, Can You Feel It, Off the Wall, Beat It, Billie Jean, Dirty Diana, Bad, Heal the World and Thriller, the songs are performed and danced by a talented cast and impressive on-stage band.

Having been seen by over four million people, in over 30 countries, Thriller Live is a crowd-pleaser and doesn’t look like it’s stopping anytime soon. In its record-breaking ninth year in London’s West End, the musical party continues to bring people together and wow audiences around the world.

The six singers are made up of Britt Quintin, Shaquille Hemmans, Adriana Louise, Rory Taylor and Ina Seidou, with Eddy Lima being the man himself, MJ. Having a mix of men and women, all adding their own style and take on MJ’s hits really takes this show from a tribute act to a diverse and concert like show.

The cast got the audience up out of their seats and joining in with Shake Your Body, and that was only 15 minutes into the show. Audience participation was a key element of the show, and the cast loved seeing the audience get up, boogie and sing along with some of the big hits.

Lima’s dancing is remarkable, and you feel like you’re watching MJ dance in person. The crowd pleaser was definitely the famous Smooth Criminal anti-gravity lean, as all the male dancers also joined in along the top of the set and it looked breathtaking.

Another dance that wowed the audience was the sexy and gritty Dirty Diana, where singer Rory Taylor let out his King of Rock, as the female dancers created impressive shapes and movements that left the audience in amazement.

Adriana Louise’s performance was exquisite, as she brought a female sass to Michael’s songs. The Way You Make Me Feel was a crowd pleaser, as the male dancers tried to woo Adriana and the audience.

From the L.E.D lit set to the colourful and impressive costume designs, every element of Thriller Live is bright, loud and energetic. A party-like atmosphere among the cast drives the energy of the show and the sharp and quick dance routines keep the stage pumping.

A high energy, robotastic show that gets you up and dancing in your seat.