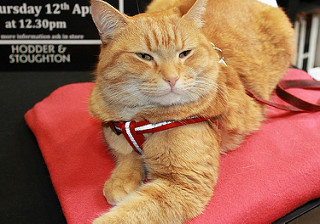 Based off a true story, James Bowen is a street busker in the hectic suburbs of London, trying to make a living. After being offered a second chance, he finds a chum for life in a furry, ginger feline, who he offers everything he has to in this hilarious yet tear-jerking adventure of survival.

The film, which stars Bob the cat himself (and six other cat lookalike companions), portrays homelessness dauntingly, capturing it so well in fact, it made audiences almost feel like they were in the shoes of those hooked on narcotics. Though it was a swift flow of emotions, Bob the cat leaving audiences chuckling and cooing throughout at how charming and adorable he was – no doubt by the end of the film, everybody had already decided that they wanted their very own Bob.

Director Roger Spottiswoode is certainly an expert at depicting the manic lives of James and Bob, having directed all-time-classic Turner and Hooch in 1989, a stunning film about a detective who has to adopt a deceased man’s French-Mastiff to help him find the murderer.

Bob becomes James’ claim to fame throughout the movie, capturing the hearts of London and moulding James himself into a star. The talent of Bob the feline is absolutely thrilling, like nothing you have ever seen before. Having been compared to canine classics Lassie and Old Yeller, whilst Bob the street cat was not quite so theatrical in saving lives, he was still incredibly heroic and painfully loyal to owner James, which left audiences with a heavy heart.

The film portrays moments of romance and heartbreak throughout, as James tries desperately to form a relationship and mask the fact that he’s still on methadone and actively seeing a drug-councillor. Though it’s evident that Bob the cat changes him as a person over time, making James want to ultimately go cold-turkey and ditch the drugs altogether. It’s simply a magnificent relationship between man and cat, bringing to light how can indeed bring out the best in us.

Undeniably, the film doesn’t really peak at all throughout which may leave some viewers feeling dull – but the story of former addict and emotional-wreck James, Bob and their friend Betty is captivating nevertheless and proves to some that cat’s aren’t just boring specimens that solely scoff, sleep and scratch up your carpets (and maybe your face).