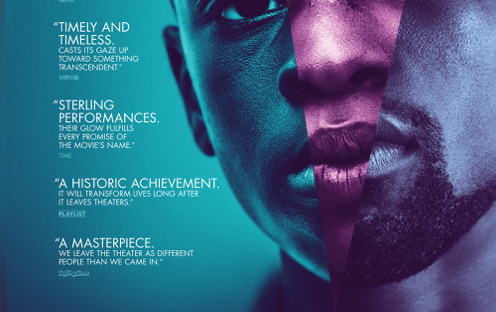 Barry Jenkin’s ‘Moonlight’ successfully explores the complexities and experiences of being a gay, black man in one of the most moving and poignant films to grace our screens in recent years.

Based on the play ‘In Moonlight Black Boys Look Blue’ by Tarell Alvin McCraney, it’s impossible to label this film without being misleading; it would be correct to say that we see drug dealing, destruction and death but it would also be correct to say this is about exploring sexuality, learning lessons and searching deep within. What does it mean to be a man? How masculine? How strong? These are all questions that the protagonist Chiron seeks to answer.

The film is split into three acts, each running for around 40 minutes and Chiron is played by different actors to symbolise the different stages in his life.

We begin with a young Chiron played by Alex Hibbert. Vulnerable and nicknamed ‘Little’ we first encounter him running from his peers. He is rescued by local drug-dealer Juan (Mahershala Ali) who offers him a safe haven in the tranquil surroundings of the suburban home he shares with girlfriend Teresa (Janelle Monae). He frequently visits to escape the turbulent relationship he shares with mother Paula (played magnificently by Naomie Harris) who drifts between casual drug user and destructive addict.

We don’t see the predictable tendencies that are usually portrayed in a drug dealer but a warm and caring individual. In one scene we see Juan holding Chiron up in the water in an attempt to teach him to swim; he is the father figure to Chiron and realises that by giving him space he will open up emotionally. It’s clear from early on that Chiron is desperately lost. He struggles to find his identity as his classmates pick him out for being different.

There are a number of significant events that occur between acts and these are only briefly mentioned as the drama focuses on feelings and confusion. Ashton Sanders plays a troubled Chiron in the second part where he battles in the increasingly difficult relationship with his mum and shares his only sexual experience with friend Kevin.

By the final act, we see a grown Trevante Rhodes who has become the product of what he believes is expected of a man. No longer ‘Little’ he returns to where he was brought up and engages in poignant encounters with his mum and Kevin.

One of the many successes of this film is the consistency between actors. Although at different stages in his life, the key personality traits are still there and even by the final act words still elude him. Instead silence speaks a thousand words and the final scene does just that. Words aren’t needed.

There is a reason ‘Moonlight’ has been nominated for 8 Oscars. Exceptionally moving and thought provoking, Moonlight will still be in your thoughts days later. The combination of thoughtful music choice; hip hop and soul just works and the camera work although shaky at times captures the vivid, human faces and stories they tell.

An independent film made on just $1.5 million it knocks the majority of Hollywood blockbusters out of the water and if it fails to gain recognition at the Oscars like it did at the BAFTA’s it will be a travesty.