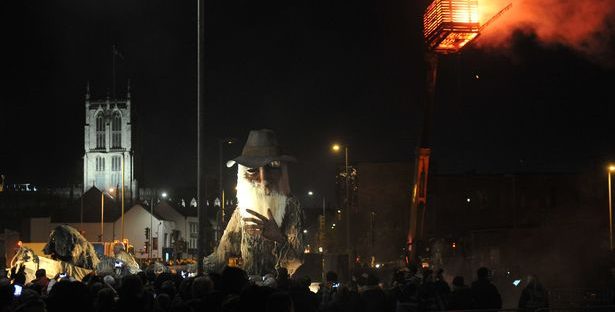 On the wintery evening of Saturday 11th November, a magical parade took to the streets of Hull in what shaped up to be the most mesmerising finale to the Land of Green Ginger story that has been playing out to audiences of thousands all year.

The event has been a beautiful and mysterious part of celebration during Hull’s UK City of Culture 2017.

Before the parade, the artistic director of Macnas, Noeline Kavanagh, had guaranteed the city would be alive with wild fun and colour.

“Land of Green Ginger will descend upon the city and take it over, weaving, stomping, romping and roaring its way through Hull. Our dreamers and schemers, creatures, wild beasts and giants will take to the streets to tickle, tease, please, excited and ignite our audience.”

Land of Green Ginger Unleashed played out on the streets of Old Town, opening with a Victorian-style clothed woman on a caravan singing and calling out to the audience, enticing them to “follow her into the woods”.

What followed was a tribe of performers from the master storytellers Macnas, dressed as wolves, shape-shifters, ogres and beasts of all kinds, both real and fantastical.

They had tens of thousands of people in awe from Saville Street to Humber Street as they filled the night with eye-catching costumes, grand kinetic sculptures and chilling music that filled the air with wonder.

The parade featured around 250 local volunteers to help the procession move through the streets seamlessly, 70 volunteer performers from Hull and of course, Macnas’ professional artists and musicians.

Giant Crom had the audience trapped in his thrall. Wolves danced through the streets with green, glowing eyes.  Fire dancers lit up the night and stilt walkers had the crowd looking up into the night sky.

Whilst in the audience I discovered that the spectacle had brought people from all kinds of places, not just locals from Hull. I was amongst families from York, Beverly and even as far as Leeds. The final chapter in the Land of Green Ginger story had brought everyone from the surrounding area together to enjoy a fabulous work of art.

It was an enchanting evening filled with dazzling sights and fantastical imagination that delighted both children and adults alike from all walks of life. The 20 minute show seemed to last a lifetime but it ended before I was ready to go home. I found myself wanting to watch it again, knowing I would have missed small details the first time round. There was so much to look at, a real treat for the eyes, that everything seemed to pass by too soon.

A once in a lifetime show, in what has been a very exciting year for Hull and it’s people.