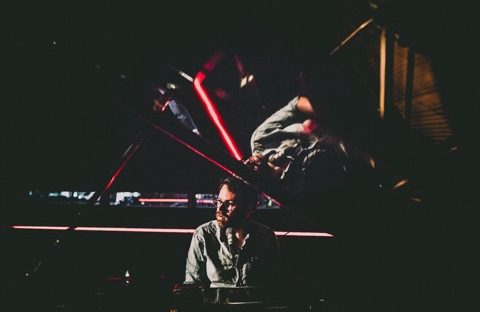 Based in the Northern Quarter, stands Castle Hotel, a small, intimate, oddly patterned pub. Upon first arrival, it didn’t seem like a place for a Thursday night gig – but where better to view a man with his guitar?

The room was intimate, to say the least, but this only added to the raw feel of Jack Carty’s simple setup. Within touching distance, he locked eyes with every person in the room during his performance of new album ‘Home State’.

With a following of only 1,820, the Australian born singer is not as big on the music scene as he should be, based on tonight’s passionate performance of “I’m not sure I’m here at all”.

Jack Carty’s music can only be described as the mellow, yet hope filling soundtracks that feature on coming of age classics – leaving you with the inspiration to do something good with your life.

More than happy to play to a total of 20 people maximum, Jack performed as if he was playing a sell-out gig at the Manchester arena, engaging with the audience and expressing how grateful he was to be headlining his first Manchester show.

As the slightly more upbeat song ‘Dear old souls’ drummed into the air, purple lights flashed down on the small stage as Jack stared straight into the crowd and won over the audience who all sang the catchy chorus along with him.

As his guitar strummed the first couple of chords for “Wedding song”, there was a shiver down my spine – Jack had an honesty within his voice which left all of the audience silent, no doubt contemplating their life relationships, whilst swaying in unison.

It was difficult to believe at times that such a soft voice could be coming from the mouth of a well-built man with a full beard who looked more like he would fit into indie rock band as opposed to his acoustic sound.

The drunk audience fell in love with Jack, dancing around the room to “The Joneses” which left him laughing through his lyrics as if he were the one watching the performance.

Applause followed him after the end of every song, and Jack made it extremely clear that he was thrilled to be getting such a response from an audience of 20-40-year-olds with their pints of Guinness and large glasses of wine.

Jack closed the show with “A way with me”, a catchy country-esque song which allowed him to show off his impressive vocal range, hitting high notes that some can only dream of so effortlessly.

Putting down his guitar on the stage, Jack thanked all of the audience for coming to support him on his first headlining gig and promised that it would be one he would always remember.

There is no doubt in my mind, that the small audience left having experienced a variety emotions whilst listening to Jack’s performance – but ultimately, Jack Carty’s sound is one that everyone will enjoy – whether it be a guilty pleasure, a rainy day soundtrack or a chill-out after a hard day at work – his album offers something for everybody.