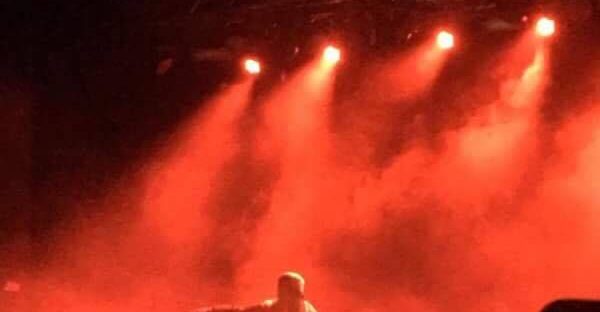 There is something mesmerising about rap artists, how they have the ability to spit bars so effortlessly.

Marcus Jamal Hopson, better known as Hopsin to his many fans, for people that don’t know who Hopsin is, he is an American rapper, producer, director and actor.

Hopsin’s support act was young rapper Token, and to say he was on another level is an understatement. He grew up north of Boston USA and is only 18 years of age and is already a major hit.

The young rap artist had a young Eminem feel to him, it had a sense of his album “Curtain Call.”

It’s not often you go to a concert and one of the support acts gives the main act a run for their money, but Token did just that.

Not only did he get the crowd pumped, he even got into the crowd himself, leaving himself exposed and centimetres away from the relentless crowd, an unreal experience you wouldn’t get at your everyday concert.  The crowd went insane and the whole room just lit up and everyone was bouncing.

Then it was time for the main attraction, Hopsin – having previously seen him at the O2 Ritz and the atmosphere was so euphoric, high hopes were in anticipation this time around.

There was something different about this concert, the atmosphere just didn’t live up to the hype, was it because it was a different arena, it wasn’t as big as the Ritz, which meant that even though the event was sold out, there were far fewer people there.

Whatever it was, it didn’t take away from how amazing Hopsin was, wearing his white coloured contacts he is well known for.

The amazing thing about these type of concerts is the unbelievable engagement the artist has with the fans, health and safety goes out of the window with these crazy rappers.

They really aren’t afraid to get stuck in with the crowd, from rapping with the fans to crowd surfing, not even giving a worry if the crowd will be able to hold them up. It gives you a totally new experience.

Hopsin also challenged someone from the crowd to rap his song ‘Ill mind of Hopsin 5’ Seems like an impossible task with how fast he can rap lyrics, however Chris, a random crowd member, a massive fan of Hopsin, absolutely smashed it out and needless to say not only the crowd were impressed but so was Hopsin.

Even if Hip-Hop is not your main genre of music, a hip-hop artist has a surreal and distinct and diverse feel to it. You won’t get the same atmosphere at any other concert, so just go and book your ticket for a concert like this, you won’t be disappointed.

Hopsin stand out performances: Nocturnal Rainbow, Crown Me, Hop is Back, The Pound.