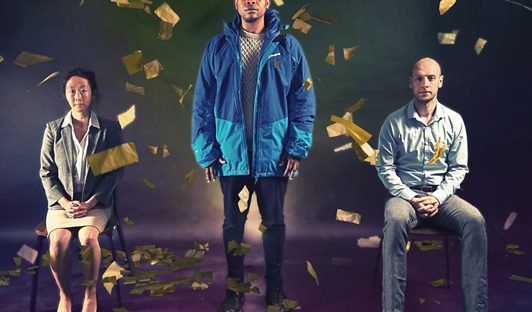 Review: The Claim at The Royal Exchange Theatre

People seeking asylum has been in the news for the last couple of years, and The Claim looks at what the process is of those seeking refuge in the UK must go through.

Mark Maughan (the director) and Tim Cowbury (the writer) spent two years researching the asylum and refugee experience in the UK by spending time at immigration courts, working closely with asylum seekers and refugees, and with representatives from migrant organisations, amongst others.

With clinical lights and a bare stage, our asylum seeker Serge (Ncuti Gatwa) enters through the main entrance, making it look like an audience member has arrived late. With ear piecing sounds, the lights flickering, a tense feeling was in the room as he scrolled his eyes along the audience, catching eye contact with us all.

Enter A (Nick Blakeley) who contastly interrupts Serge as he tries to explain the story about his childhood. Jumping in during every sentence, A starts speaking over Serge and leading him to frustration and not wanting to talk at all.

Not completely understanding every British mannerism and phrase, like saying “Sorry?” instead of “What?”, Serge expresses the humour in the British unusual language that might be quite hard for foreign people to understand. But through the common love of gummy snakes, Serge and A find an understanding of each other, and create a friendship.

Enter B (Yusra Warsama), who dominates the stage as she interviews Serge, but there is a language barrier. She won’t speak slowly enough for Serge to understand, she starts making him feel uncomfortable and there’s tension in the room.

Requesting that A comes back in the room, the atmosphere is calmer again and everyone is able to understand… or only parts of the story is told.

By not listening to Serge’s story earlier when he was interrupting, A starts fabricating the story, and including guns instead of a piece of gum. Without really listening, the story of how a small boy hid in his room while chaos swirled around him turns into a false story of murder and accusation.

Comical moments lighten the very serious issues at hand, like a constant reminder of the holiday to Ios, breathing techniques and childhood memories of a lion in a tophat. But underlining it all is the big issue of the story – miscommunication.

A play that leaves bums on the edge of the seats, frustration and understanding, The Claim is a fabulous piece of theatre that unravels the experiences of asylum seekers and refugees. The Claim is showing at The Royal Exchange until 13th January.