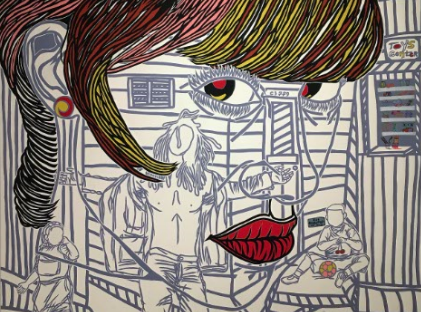 One particular piece of artwork completely stole the show, its contrasting splashes of oranges, blacks and purples a definite eye-catcher. The piece seemed to single itself out from the rest, it’s stunning shades seeming to attract the attention of people passing by the exhibition, or maybe the depth surrounding the art kept people interested in trying to interpret it in their own ways.

The Femme Facile, which translates to ‘easy women’ in English, explores the fragility of women’s modern day lives in Cameroon. The piece portrays the struggles women go through day-to-day and illustrates how easy it is for women to take up sometimes more than they can handle whilst still trying to keep a sense of identity.

The stunning colours initially indicate a frantic urban scene with far too much going on to question, but a closer analysis into the piece indicates a much darker and daunting reality.

Picturing a woman sitting tired whilst a child paws at her back for attention demonstrates her sense of exhaustion, whilst another woman looks invested in keeping her man happy. It illustrates other demands too, washing, a cooking pot and a questionable image of what seems like a rat, probably initiating that it’s the woman’s job in Cameroon to keep the house safe from what lurks on the poverty ridden streets.

A close-up outline of a woman’s face is painted on top of the street, strong white and blue lines standing out brashly against the warmer colours behind her. The woman’s shocking purple hair is definitely striking and it completely retains her sense of identity and individuality in a bustling African city. Despite all that’s on this woman’s mind on a daily basis, she seems to remain herself and keeps in check with her unique differences she’s known for.

In the modern day society of Cameroon, women are generally seen in quite a submissive light, despite the increase of feminist related campaigns throughout the world. The artwork connects to women and exemplifies the struggles that most women face but do not particularly voice, hence why they are seen as ‘easy women’.

Of course, like every piece of art, the work is very much open to individual interpretation. Nzebo does his best to present his work in a way that people will make up their own minds about it, though it was honestly quite impressive that most people viewing it had similar interpretations – it definitely proves that Nzebo is capable of producing a solid and richly meaningful piece of artwork.

Sadly, the exhibition at Mancheser Art Gallery has now ended, but you can read more about Nzebo’s work here.