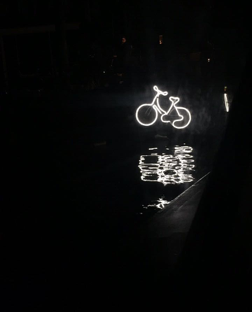 Amsterdam is best known for its red light district and weed, but the organisers of the city’s winter Light Festival must have been smoking a bit too much if they think people will be rushing to pay another visit to this festival, then they would be very wrong.

Now in its fifth year, the festival attracts artists and designers from all over the world who bring their light artworks alive.

You can either take a walking route, with the theme of ‘Biomimicry’, which applied the logic and structures of nature to solve human problems. Or you can take a boat cruise along the canals with the theme ‘A view on Amsterdam’. Here artists offered a new view of the city, its architecture, future and role in the world, which could be interpreted in any way.

Ticking off the main tourist attractions, the Light Festival was set to be a fantastic and memorable evening in the Dutch capital. However, the harsh reality was that the boat tour was cramped, sluggish and disappointing. It really wasn’t up to much – and certainly not worth 20 Euros.

Things started badly when the boat was nowhere to be seen – and getting the wrong boat entirely. Luckily the boat didn’t set off and finally finding the right boat, it was like an aircraft cabin: cramped and crowded with no leg room.

Setting out on the cruise along the canals, the voice over guide broke, meaning we missed out on vital information. And when the voice over was finally fixed, the commentary through our headphones was full of dull facts anyone could have Googled.

Putting a brave face on as the boat chugged past the artwork, winking red and blue in various shapes, many of the lights were just plain white lights, with the exception of one or two which actually had an array of colours to my surprise.

But here again, disappointment set in. You didn’t get to see all of the light if you sat on a certain side of the boat.

The combination of let downs, dull presentation and lack of interest had the unfortunate effect of sending my friends – so full of youthful energy and excitement a matter of hours before – to sleep.

Realistically, the only good thing the boat provided was some pretty pictures to put on Instagram. You could spend far less on a space cake and hallucinate a better light festival.