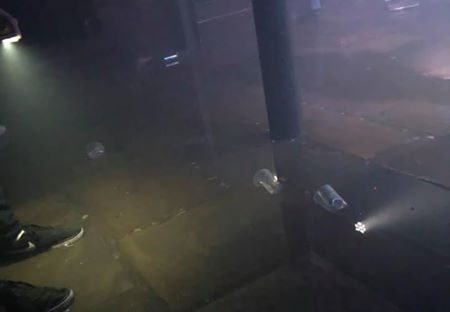 A broken tap in the men’s bathroom led to the bottom floor of Joshua Brooks being flooded during a Quids In event this week.

The flood occured around 1am. The broken tap coursed a leak from the bottom of the wall in the bathroom and ended up soaking a flight of stairs and partially flooding the downstairs area of the club.

The flooindg occurred during the bar’s popular Quids in event. Club staff closed the flooded bottom floor of the club at 2am, nearly an hour after the leak started.

There was no official message from Joshua Brooks on what happened, and the only message from any club representatives was on a Facebook post of pictures of the flood posted to Fallowfield Students Group.

Wakil Ahmed, club supervisor for Joshua Brooks commented on the pictures, saying: “Apologies for anyone who was present during this. Unfortunately it wasn’t a simple case of just turning the water off and it made more sense to try to disconnect the toilet sink.

“By the time things were sorted the burst pipe (which was caused by someone breaking the tap) had already caused a lot of damage which continued to drip through the ceiling.”

Student Michael Hawkins, who witnessed the leak on Monday night, said: “I went to the bathroom, and everything was sound, I went to wash my hands and the tap wasn’t working at all. I looked to the next sink and someone had smashed off the tap.

“When I came out of the bathroom my mate pointed out the water coming out the bank of the wall. The security guy that manages the stairs also saw, but didn’t do anything about stopping people passing through, despite how much water already was sat on the steps.”

Hawkins claimed the club security were slow in dealing with the situation.

“It took me and my mate numerous attempts to tell the security guy to shut the stairs off. As soon as we mentioned someone falling and making a claim, he was quick to put a chain across and stop people going down but access was still available to come up from the bottom floor,” he said.