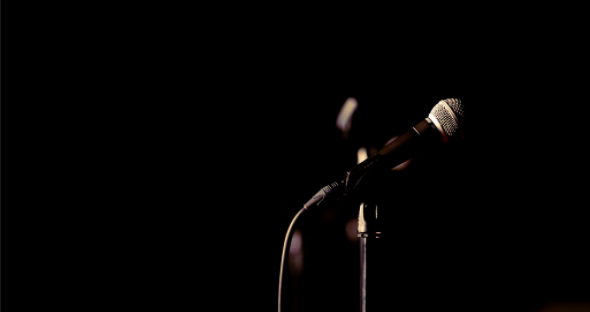 Manchester’s Comedy Store, sister to its store in London, is the biggest establishment to offer the public the very best in stand-up comedy in Manchester.

The old style theatre has been in the centre of the stand-up scene for over 15 years in Manchester in Deansgate Locks, surrounded by bars and clubs; it stands out on its own.

With all this hype, I had to see for myself what all the fuss was all about.

I went along to their show on the 6th December which included performances from MC Zoe Lyons, The Noise Next Door, Justin Moorhouse and the well-known Mick Ferry.

As I walked through the building, it was hard to ignore the majorly long bar situated right in front of each individual theatre, all the way along the whole room, a pretty perfect opportunity to grab yourself a drink (or three) to enjoy the evening ahead.

After slowly following the crowd into our allocated theatre, the auditorium was packed out for an assumingly sold out show. As we sat down in our seats, you could feel the thirst for laughter in the air, as the crowd eagerly anticipated the arrival of our first act.

As the lights dimmed and the curtains drawn away, there a great cheer from the crowd because this is what they had been waiting for. A somewhat timid MC, Zoe Lyons stepped up to the microphone.

At first, the audience seemed apprehensive of Zoe, possibly because she was one of the lesser known acts on the bill, but soon enough had the crowd chuckling away in our seats. Her full force act on the highly topical gender debate within stand-up I think was the decider in her opening sequence, levelling with the crowd and making a mockery of herself as a woman comedian really hit home.

Next up to the stage we had the unusual group act of The Noise Next Door. This quartet of critically acclaimed comedians really engaged with the audience with their brilliant quick witted remarks about each other in the group after a bit of audience intercation, which kept the audience engaged. Due to the lightheartedness of the hecklers’ outbursts and the responses given back by the quartet, it kept a sense of unity between the acts and the audience in a form of comedy where everyone felt involved.

Next up to the stage was English-born Justin Moorhouse, who really made the crowd laugh with his anecdotes from his previous occupation as a salesman, as well as his time working with Peter Kay in his Phoenix Knights show. The inclusion of Peter Kay really grapsed the audience’s attention because of his massive name in stand up comedy, and it was fair to say that these stories he told really kept the audience laughing.

Last but by no means least up to take the stage was the massively famous Mick Ferry. Mick broke onto the stand-up circuit in 2009, and since then he has been regarded as one of the most sought after comedians in the UK and international circuits. He joked about the problems he faces getting older, which went down very well with the older people in the audience. In this particular theatre, it was full of people on their Christmas work parites, so Mick seamlessly commented on the muckeries which occur on staff parties, leaving some certain individuals red faced with tears of laughter.

All in all, my night at The Comedy Store was very pleasing, and I would highly recommend for an incredble, light hearted night out for eveyone to enjoy.