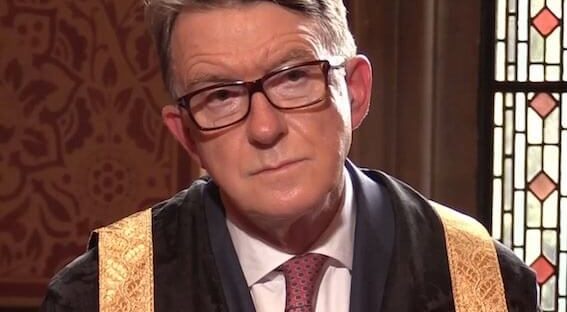 By Max and Damilola

In the second of our series of articles on the EU referendum, Lord Peter Mandelson, the newly installed Chancellor of Manchester Metropolitan University, speaks to Damilola Oladokun and Max Pilley, both studying journalism at MMU.

With the EU referendum less than two weeks away, the new Chancellor of MMU has issued a stark warning over the effects of a leave vote on the university’s future.

Speaking to Northern Quota, Lord Mandelson said that a Brexit result would have a “tremendously negative impact on university funding.”

He pointed to the potential loss of funding that all universities receive from the EU, but suggested that there is a second, more potent risk.

If we walked away from what is our own vast home market in Europe, we would not trade as much, we would lose jobs, our investment would fall, our economy would become smaller, and our society would become poorer, and therefore we would have even less to put into universities.

Lord Mandelson was speaking on the day of his installation as MMU Chancellor at Manchester’s Town Hall. He underlined the importance of the vote, reminding people that this referendum was more crucial to the country than other political decisions.

It’s not like a general election, where you can put your vote on one colour, and then three, four or five years later just boot that team out and change direction. This is a once-and-for-all decision, we will not be taking a decision like this again in our lifetime.

Mandelson worked in the European Commission as the EU Trade Commissioner between 2004 and 2008, and has been a vocal supporter of the Remain campaign leading up to this referendum.