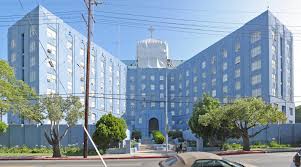 Reaching out through Twitter seemed to be a logical starting place for Louis Theroux’s new BBC produced documentary film about the mysterious religion. Not much is known about Scientology.  Formed in 1954 by L. Ron Hubbard who died in 1986.

However, Theroux through Twitter got a feel through a bombardment of tweets, which feature in the film’s opening of what people’s views towards this enigma were. These served a dual purpose, and perhaps more importantly, allowed him to reach out to people who aided him in unravelling the truth behind Scientology.

Theroux is unfortunate as he is not given any permission to interview any of the current members or leaders. Nor does he have access to their facilities, in particular, the Celebrity Centre in L.A.  Louis does reach out, however, to a former Scientology enforcer Marty Rathbun – who is now hated and disregarded from the church for ‘betraying them’. Theroux was forced to use actors who, under the influence of Rathbun, were taught how to simulate and embody members of Scientology including its most famous recruit Tom Cruise.

“I think it's a privilege to call yourself a Scientologist and it's something you have to earn. And because a Scientologist does, he or she has the ability to create new and better realities, and improve conditions” Transcripts of Tom Cruise Scientology, 2008

As the film develops with its blockbuster soundtrack and quick editing it turns into something more familiar but also unexpected. In one scene we have Theroux and Rathbun discussing the beatings of members, who they would have put in ‘the hold’ for suppressive behaviour. During this they discover that they are in fact being followed, and have been for quite some time, by a car with blackened out windows meaning identifying their pursuers is impossible. I then started to ask myself; Is Louis Theroux really safe?

There are some incredibly conflicting and convoluted performances from the actors, who at times really do embody the members of the church. In particular, actor Andrew Perez who plays the Chief and sinister villain David Miscavige.  We see him on set with actors performing a pep-talk which turns nasty.  We see him at one point asking one of the actors to lick the floor and another to crawl around the room like an animal.

Miscavige himself, at times, found it hard to switch out of character.  Scientology itself does state that the human body is only a vessel. Had in fact David Miscavige heard Theroux’s calling and actually possessed the body of actor Andrew Perez? This is something that Rathbun questioned himself. Was there more to this organisation than celebrity endorsements and selling books by a Deadman?

If this wasn’t enough, we find an already traumatised Rathbun confronted outside the films’ base by hitmen throwing some serious shade that would make the best of us whimper.  Theroux uses this to confront the members but gets nothing more that insults thrown back at him. Are we finally seeing a situation which Theroux does not have complete control over?

Following this altercation, Rathbun is questioned by Theroux about what had just happened. Rathbun vents his frustration and anger at the filmmaker, making for uncomfortable viewing. One of the more compelling aspects of the film was how what was initially a documentary about Scientology developed into something which was more about the relationship between these two men.

How does Scientology really work and how does it audit its members? Is it just a pyramid scheme selling ideas, or is it a genuine religion for people who have found it difficult to find their place in the world? It is hard to say, but given the $50,000 price tag one ex-member spent, I would think the former.

Whatever the reasons, My Scientology Movie does its best to explore the facts, however, silly the direction does go at times. The repetition of archive clips sometimes slowed the pace of the film. However, as there is a suspenseful overshadow of impending threat surrounding the filmmakers throughout filming, I found myself thinking at one point that people in the cinema could actually be members of Scientology.

This does leave a film that isn’t without its fair share of conflict and action and does leave you leaving the cinema wanting to know more. My Scientology Movie II anyone?