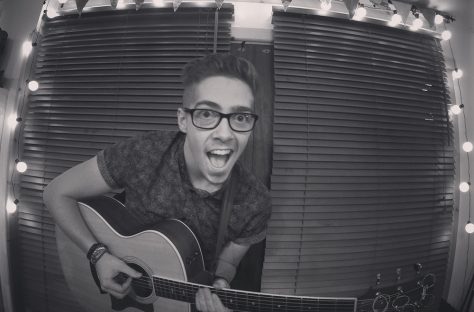 A graduate from Manchester Metropolitan has been shortlisted for prestigious award Young Folk Musician of the Year 2016.

Jack Patchett, who recently graduated with a first class degree in Popular Music, beat stiff competition to become one of only 10 finalists.

While studying at the in the department of contemporary arts based at MMU's Cheshire campus, Jack wrote the songs that won him a place in the shortlist as part of his final year project.

It was a bit of a shock I must admit, I'm just really pleased to have been selected.

He said: "It was a bit of a shock I must admit, I'm just really pleased to have been selected. The plan is to use the residential weekend as a way of meeting new people and making some good industry contacts. The competition is just a bonus!"

He said: "Among a very strong field of excellent songwriters within his year group and across our entire BA in Popular Music cohort, Jack stands out as an exceptional talent whose songs and performance style are simultaneously rich and complex at the same time as being engaging and emotionally touching."

Jack now has a residential BBC workshop in the north of England to look forward to, where he will be working on his craft alongside other folk artists.

At the end of the residential workshop there will be a concert in which all 10 shortlisted musicians will compete for the last four places and a performance slot at the BBC Young Folk Musician of the year awards evening. The top prize is three summer folk festival slots including the International Cambridge Folk Festival.

Programme leader Dr Jason Woolley said: "All the team agree that Jack thoroughly deserves this opportunity. Jack was a focused student and an excellent student ambassador for the Musics Network on many occasions. Jack won a student award from Manchester Met in his graduation year for his commitment and we wish him the very best of luck."