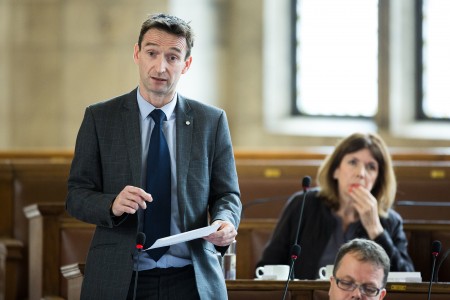 Many homeless people do not having access to communal toilets, which has led to an increase in public urination in the city centre.

Homeless people or members of the public could soon face fines for public urination of up to £100 by a public space protection order (PSPO) issued by the council.

In a survey conducted by RSPH (Royal Society for Public Health) in 2018, three in four (74%) of the public say that there are not enough toilets in their area.

The survey also found 16% of those who did the survey resort to a back alley or bush if needed.

Joe Payne, who lives in Hulme and has been homeless for more than six years, believes the council needs to do more to provide basic toilets and washing facilities for the homeless

“Usually, I’ll just go in a bush. I feel bad when people see me but there’s not really anywhere else to go,” he said.

“Finding an actual toilet is hard sometimes. Some shelters I go to will have one but there only open in the day. At night finding a toilet is impossible.

“I used to make the trip to some of the public toilets in the centre but now I use a bucket. That may sound horrible but when you need to go it’s my only real option.

“Showers are very hard to come by. When I do go into the centre I’ll use the sink and a bit of soap to wash.

“I think they (council) need to do more. So many of us have these issues but little is done to help. Being able to go to the toilet should one of the main things their dealing with”.

Asked if he feared the possibility of fines for public urination, Joe said: “If I get fined, I get fined. Not really much else I can do”.

Apart from Lloyd Street, the council currently has no plans for increased toilet provision in the city centre.

Councilor John Leech, leader of the Liberal Democrats, recently sought to use council reserves to make Manchester city center toilets more accessible with 24/7 toilet provision but his proposal was turned down.

Manchester city centre currently only has one existing public toilet on Lloyd Street that’s open which is planned to be open 24/7 hours according to the council’s draft budget.

Councilor Leech has since criticised the decision to run down his proposal saying the scrutiny committee are “falling over themselves to not support the deal”.

He added that access to toilets is “one of a very large number of issues homeless people face” and that if people are being fined under the PSPO, the “council need to do more to provide facilities for the homeless and others in the city centre”.

“I think it’s purely party political. I know privately a number of Labour councillors have serious concerns about what impact the PSPO will have.

“I suspect privately they would support additional toilet provision,” he said.

“But in the last 20 odd years there’s been a reduction in the availability of toilets, not necessarily because of financial reasons but because of problems surrounding safety, security and anti-social behaviour”.

However, Councillor Leech said it was “essential” even with the “significant cost attached to make sure it’s provision is safe and usable”.

He said: “Providing public convenience in the city centre is a clear responsibility of the local authority.

“People who live in the centre, don’t want people urinating on the street, they’d rather see people using facilities.”

It has been reported that officers were asked in January to look into the matter and report back to councillors.

In a report in the Manchester Evening News, Councillor Sarah Russell, chair of the scrutiny committee, was quoted as saying that Councillor Leech’s amendment was “political” and “disappointing”.