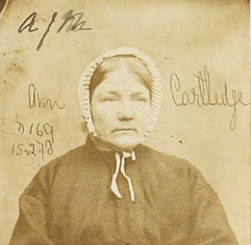 Victorian England is known for its brutal and violent history, crime was prevalent and even worse is the punishment for these crimes from hangings to heads on spikes.

If you are interested in true crime you would want to know about Manchester’s most famous female criminals in history.

“I have always been interested in the history of Manchester, it started when I did my own family tree and that sparked an interest in me to know more about what my ancestors did. I went onto do a PHD which was on how Victorian’s disposed off the dead and within this research I found interesting stories about crime and gritty stories” said Michala.

A special talk on ‘Manchester’s Worst female criminals’ is on next week at MMU organised by Michala Hulme.

“The most interesting case I have come across is one of Ann Carteledge who provided a service to have illegal abortions as in those times it was seen as a big taboo, she was a mid-wife who took money off women to provide abortions and eventually a woman died and she was sentenced to death by hanging” she said.

Michala added “If you think about Manchester during the Victorian period which is predominantly where my research is based, and you think about how busy it was and the poverty which made people desperate. You can see why there was this underbelly and the amount of crime going on”.

This talk is a perfect opportunity for any history and crime enthusiasts to dig their claws into and learn more about what really went down in the Victorian times.

Michala hopes anyone who is interested in this would be able to attend “The talk is free and open to anybody, and I hopefully will be sharing new information they don’t know about. I have some fantastic pictures of these women which is interesting as there are these Victorian looking mugshot”.