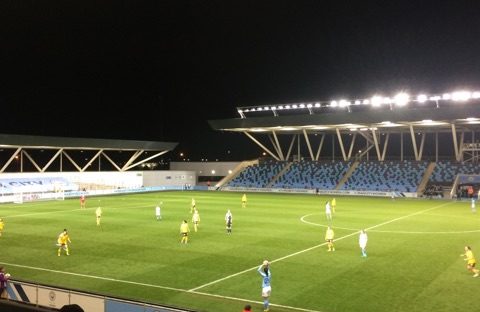 The Blues took a five goal advantage going into last night’s last 16 second leg tie and started off strong, piling the pressure onto the away side early.

A positive start for City was interrupted by a Kvinner goal after just seventeen minutes.

Captain Steph Houghton was caught out of position allowing Kvinner to capitalise. A through ball and a squared pass fell to forward Marte Berget whose lunging effort beat City Keeper Ellie Roebuck to give the away side the lead.

The goal was a shock to the City system. City responded with several attempts on goal but went into half time trailing by a goal to nil.

City started the second half with a real urgency about them and were level within a minute.

Claire Emslie drove down the right hand side and managed to find Parris who played through, player of the match, Christiansen who slotted the ball home.

City’s positive start to the second half came with some misfortune as moments later Megan Campbell was stretchered off and replaced by Melissa Lawley. No exact word on the extent of Campbell’s injury as of yet but it seems the defender has damaged her right knee.

Manager Nick Cushing commented on Campbell’s injury after the game.

He said. “We don’t have any diagnosis yet but it doesn’t look great.”

With Campbell’s injury in mind, Cushing’s side managed to take the lead after seventy-three minutes with a well worked goal.

Kiera Walsh picked up the ball just inside the oppositions half and executed a driven pass out-wide to substitute Lawley. There was a quick one-two between Lawley and Christiansen before Lawley out-paced right back Ingrid Wold down the line. Lawley delivered a low ball into Parris who met the pass with a first timed shot placed into the left hand corner of the net. A superb goal.

City had found their groove and were comfortable up until the final whistle.

Cushing expressed how proud he was of his side winning eleven out of eleven games this season and reaching the last eight of the Champions League.

He said “Really proud of the team tonight getting the win and making sure that we keep up the eleven games eleven wins, and yeah we’re happy to be in the next round of course”

Kiera Walsh said that reaching the quarter-finals is important for the team but the opposition left in the competition can’t be taken lightly.

Cushing added: “I think the quarter-final is competitive. I think, maybe different from last year, we’ve got the best eight teams in Europe that are now in the last eight so every draws going to be difficult.

City now await next Friday’s quarter-final draw to see who they will face in the next round. The likes of Chelsea, Wolfsburg, Barcelona and holders Lyon will all feature in the draw, with the ties being played in March 2018