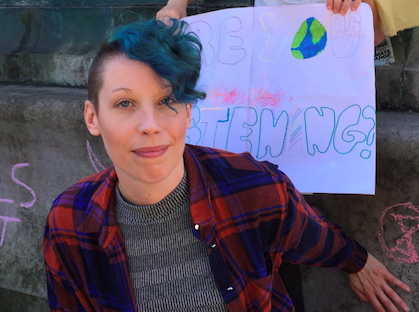 -She plans to push Eden Project North to regenerate her constituency

Man Met’s Senior English Lecturer, Dr Chloe Buckley, is running as a member of the Green Party to stop her constituency disappearing under water.

Chloe, who has been working full time and managing her campaign, will run for MP for the Morecambe and Lunesdale constituency, which is currently held by the Conservative party.

Morecambe lies on the coast and is facing a number of environmental issues.

Chloe’s main priority, after sorting Brexit, is the environment. She said she will be: “Tackling the climate crisis because that’s the biggest issue. I mean, where we live because of the bay, if we don’t get to zero carbon emissions by 2030, we’ll be under the sea. We won’t exist; we won’t have a constituency. The sea levels will rise by two meters in the next 20 years so that’s the biggest priority for us really.”

Morecambe has been chosen to be the site for the Eden Project North, which is a big scientific tourist attraction in Cornwall which does biodiversity work. They have decided to extend the project to the north. Chloe will also be focusing on putting this into motion by fundraising and lobbying the government to ensure it goes ahead.

She said: “To do it, they need buying investment from the local councils and the local businesses and from central governments. So, they provide some of the funding and then other funding comes from other places. Green Party councillors have been working on it for about seven years.

Chloe has been a member of the Green party for 10 years. She decided to run for MP last year because she was fed up of none of the other parties caring about the environment. She praised the Green Party for their encouragement for females to run as candidates.

She said: “I’ve had lots of support from the local party so that’s been great, and the Greens are really great about saying  ‘Look at all our amazing female candidates’. It’s a real big push of theirs to support women to run which is fantastic!”

She is hopeful about increasing the number of Green party seats in Parliament. She said that three of her fellow Green MPs have a good chance of being voted in across the country, but she said: “I’d be happy if we just doubled our number of MPs from one to two!”

Full list of candidates standing in the Morecambe and Lunesdale constituency.