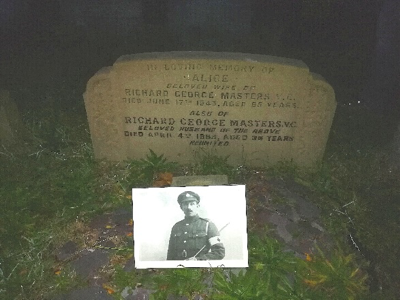 On 9 April 1918 Private Richard George Masters made repeated journeys under heavy fire across no man’s land to save the lives of 200 men.

Masters was one of only five men to be awarded the Victoria Cross in the history of the 156 Royal Logistics Corps (RLC) regiment.

Near the French town of Bethune, Masters volunteered to try and reach wounded men who had been cut off because of an enemy attack.

Despite being told that the road was impassable, his was the only vehicle to make it through to the wounded.

Masters drove through heavy machine gun fire and was forced to clear debris off the road while being bombed by a plane.

He made repeated journeys across no man’s land bringing back approximately 200 injured soldiers.

Private Masters was later gazetted for the highest accolade a British soldier can receive, the Victoria Cross.

Born in Southport on 30 March 1877, Masters was one of five sons to David and Margaret Masters. He was 37 when war broke out.

As detailed in the ‘Comprehensive Guide to the victoria cross and military cross‘, he was previously a chauffeur before becoming a driver for the Royal Army Service Corps (RASC) and was attached to the 141st Field Ambulance Service.

Before his actions in 1918, Masters had previously been awarded the French Croix de Guerre for saving the lives of wounded men during the Battle of the Somme.

On 7 March 1917 Masters drove from his advanced dressing station (field hospital) to a quarry where he returned with several causalities.

Colonel Tim Gould said: “His values were no different to that of soldiers serving today, a century later: possessing self-discipline to conquer his fears, selfless commitment to the job in hand.”

After leaving the army, Masters returned to chauffeuring and later became the President of the RASC Southport branch. He was also an expert cyclist and cross country runner.

He died on in April 1963, aged 86 and was buried at St Cuthbert’s Church in Southport.  His family donated his Victoria Cross to the RLC museum in Camberley Surrey.

The road of the RLC Reserve centre based in Bootle, Liverpool is named after him.

The British army’s Royal Logistics Corps was formerly known as the Royal Corps of Transport (RCT) which included the Field Ambulance unit that Private Masters served in.

This weekend, members of Salford 236 RLC squadron traveled with other units from 156 RLC regiment to the site where Masters’ actions earned him the VC, accompanied by Doctor Jonathan Fennell of King’s College London.

Colonel Tim Gould said: “This is why we, as soldiers, within the regiment hold Private George Masters in such high regard, because despite the generations between us we are kindred spirits, drawn by service, tempered by conflict and whilst being ordinary ourselves, aspire to achieve extraordinary deeds like our forebear George.”