Makeshift netball squad loses to Notts, but hopes high of injured players back before derby day

MMU netball head coach Paige Kindred was pleased with the performance of her team in Wednesday’s 38–53 loss to Nottingham Trent – but she didn’t like the result.

Missing four players from their starting line-up – three of them Scholars – MMU struggled at times to contain a pacy Nottingham attack. At the final hooter Notts Trent were understandably delighted and so move above MMU in the league, but Paige had words of praise for her team.

“It’s not nice to lose, but we drew the last quarter,” she said.

“We had that dip when we gave up and lost a bit of concentration earlier in the game, but we managed to pull back the bigger deficit and have a good last quarter. It was just wasn’t to be on the night, but I´m happy to finish the way we did.” 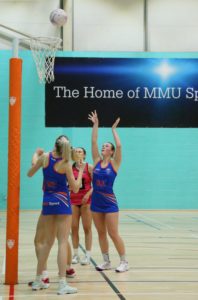 MMU patched up the injury gaps with second team players, and Paige was pleased with their performance.

“I’m proud of the girls who’ve stepped up from the second team into our squad now. They have really taken the opportunity, and this is the second time for them to play with the firsts.”

Even though the scoreboard shows a 15-goal difference, Paige sees the game another way.

“If you take the second half and get rid of the run they had on us, I don’t think the result reflects the game. We both turned the ball over, and we both had opportunities. They just executed when we didn’t.

“We definitely gave them the opportunity, rather than them winning them. The issue was between our miscommunication and our disconnection, and that’s reflective of the fact that some of the girls have never played in this combination.”

“That will give the team more depth and options in different areas on the court, including experience and connection within the units,” she said.

Goalkeeper Libby Ahovi worked hard in defence and won praise from her coach.

“I think Libby puts in the hard graft at the back. She steps up and turn the balls over when we really need it. It’s a hard task to be a goalkeeper when the ball is coming down on you so quickly. Libby had a good game.”

Kindred also had words of praise for the opponents, for laying in hard work prior to the game:

“Credit to Nottingham Trent. They’d done their homework to push us to the end. Their shooters did very well.”

The Nottingham Trent captain, Rachel Duckers, was pleased with the win, the hard work and the game plan.

“We’ve been working very hard in training, so we’re glad that turned into a good performance. The last time MMU came to us they took the win, so we wanted to bring the game to them tonight. It was a good physical battle and credit to them; they made us work for it.

“We really wanted to concentrate on not forcing the ball into the circle. It was that last pass into the circle that we struggled with last time against the MMU defence, so I’m glad that we controlled that.” 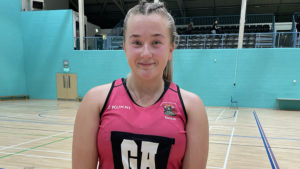 Next for MMU is a derby day against the University of Manchester on Wednesday. Last time round, MMU won by 30 points. Kindred is hoping she can patch up her squad and get injured players back in time for that. It should be a good game.