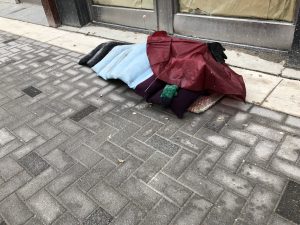 The City of London’s Homelessness Prevention Team had a large turnout for its first community meeting.

More than 100 people congregated at Central Library for the first meeting of its kind. In order to adhere to fire codes, organisers had to turn people away at the door because the room was at capacity.

“It’s a really good sign that so many people in London care,” said Becca Amendola. The Fanshawe student was once homeless, and was one of a handful of people who weren’t able to get into the meeting.

Amendola and the others will be guaranteed a spot at another meeting that organisers said will be held in the near future.

The purpose of the community meeting was to create an open dialogue between the public and the Homelessness Prevention Team. There were people from all walks of life who came to the meeting hoping to give their input on the housing stability.

“Homelessness and housing is a complex community issue that requires a community response,” said Craig Cooper, the Manager of Homelessness in London in a news release.

Among the issues needing to be tackled is food security. “We know a lot of faith-based organisations are already doing an excellent service to the community by providing meals. We’re hoping this meeting will present an opportunity to work collaboratively with groups to expand their reach in our community.”

Another area to address is housing. Becca was fortunate enough to be able to access essential social services to pull herself off the streets. She looks to Finland as an exemplary model of handling homelessness.

“Canada has a Housing First program but it’s very limited. It’s much more limited in the scope of what it covers. In Finland, they focus very much on harm reduction and recovery,” she said.

And in order to reduce the harm, people need places to live first. “[Finland] focused on giving them a stable house first instead of forcing them through programs of recovery.”

Homeless shelters in London are at capacity. Affordable housing waitlists are sometimes years long. The Homelessness Prevention Team will be looking to scratch money together from a variety of business cases in the 2020-23 budget.