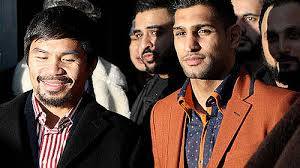 A fight that many boxing fans excited as the potential super-fight looks like it is finally set to happen as Manny Pacquiao and Amir Khan confirmed they are in talks over the potential match-up.

Khan’s hometown of Bolton, Manchester and even the United Arab Emirates have been identified as venues for the fight.

Twitter and Facebook have been abuzz about the fight for a while now, with Pacquiao finally giving fans some news when he tweeted: “My team and I are in negotiations with Amir Khan for our next fight. Further announcement coming soon.”

Khan soon gave his own announcement with the following tweet: “#Pacquiaokhan What do think? Currently negotiating with Manny #teampacquiao. Coming soon. Watch this space!”

Khan has been wanting a super-fight for a while, both Pacquiao and Mayweather have been rumoured, but with Mayweather locked in a war of words with UFC star Conor McGregor it appears Pacquiao will give him the opportunity to take on a bonafide legend of boxing.

Khan hasn’t actually fought since last year going down in six rounds to Mexican Saul Alvarez, his decision to move up two weight classes seen as a mistake. This will be Khan’s chance at a career redemption.

Pacquaio’s promoter Bob Arum made a statement to ESPN this week: “Whether it will happen or not I just don’t know because they have to come up with a large amount of money.

“Manny seems to believe they will come up with the money. I have some reservations whether it will happen or not.

"If the money comes up I will aid and abet the fight happening.”