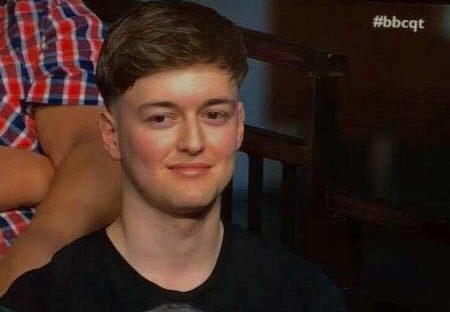 “I’m the guy that called Theresa May rude on Question Time”: MMU student grills Theresa May on live TV

Andy Warhol once declared “everyone will be world-famous for 15 minutes”.

Not for one minute am I claiming to have been world-famous but it seems a lot more people have seen my face in the last week than ever before.

On Friday, I was part of the audience for BBC One’s Question Time: Leaders Special, resulting in a multitude of statuses, tweets and articles on The Independent, HuffPost UK and Joe.co.uk.

This Friday, I will be on a Victoria Derbyshire election special.

I pulled up Theresa May’s hypocritical soundbites on Diane Abbott and reminded her that her own party has been making similar errors throughout her campaign.

I also had the opening question for Jeremy Corbyn’s half of the programme.

After the show, I made the cut for the spin room.

Along I went for the education purposes.

Laura Kuenssberg and Faisal Islam were just some of the prominent journalists present.

Boris Johnson, Andrew Gwynne and Michael Fallon were all in close proximity whilst live on Sky News.

A bunch of student publications approached me for an interview.

‘Haha, good one’ I thought.

Turns out they legitimately wanted my thoughts.

And so did Sky News.

A lot of strange things have come about following that night.

Multiple accusations of being a plant.

Most jaw-droppingly, the invite from a Conservative supporter with profile pictures featuring David Cameron and Theresa May to partake in swinging. Yes, really.

Regarding the plant accusations, I have to say, I found them quite flattering.

Friday night was the first time I had been in the same room as Jeremy Corbyn in my life and my question was off my own back.

I may be a Labour and Momentum member, but my appearance was purely of my own accord.

My question to Mr Corbyn was open-ended and yes, I did nod along with his response, as I had hoped he would mention the skill set of Keir Starmer in comparison to certain others.

Why would I try and trip up the man and the party I support?

The questions were submitted in the lead up to going live and the producers only informed us which questions had been chosen minutes before.

I had big questions for Theresa May too, but unfortunately they didn’t make the cut so I tried my best to get involved spontaneously.

I have been told I am a “middle-class leftie student” which in itself is a strange kind of insult; I’m working class and a being a “leftie” should not be used as an insult in respectable political discourse.

I have also read that my hair resembles a ‘bellend‘.

Fair enough on that one.

It is certainly a strange experience to have strangers assume things about you.

I will say, however, that it appears those who support certain other parties choose to attack others, just like Mrs May did in response to my question, rather than take responsibility for their actions.

I also want to condemn the war-mongering nonsense that side-tracked the debate.

I am extremely glad the young lady managed to interject and diffuse what was a quite ridiculous argument about a hypothetical scenario this country and world should ideally never have to consider.

All lives on this planet matter.

For a bit of context: my constituency is York Outer. Whilst I was on Question Time, Luke Charters-Reid, the Labour candidate of 7 weeks, visited my mum and neighbours.

She’s yet to meet Julian Sturdy, the Conservative candidate who has ‘represented’ the constituency for the last 7 years.

On Thursday, I will be voting with a future for the many, not the few.

I hope you do too.

How will you be voting in the election? Have events like Question Time changed the way you will vote?