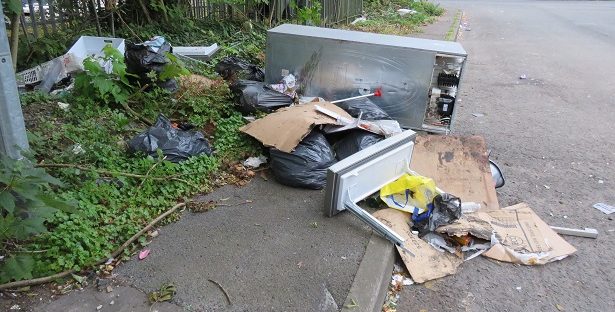 A Salford man has been found guilty of illegally dumping a fridge freezer and bags of rubbish.
Benjamin Obejo, of Silsden Walk, Salford hired a van to dump a fridge freezer, black bin bags and other items of rubbish on land at Harding Street.

They were able to trace Obejo as the driver of the van and when interviewed he admitted hiring the van to dump the items.

When asked why he had not disposed of the waste at a recycling centre, he claimed: “It was late and nowhere was open, sorry.”

Obejo admitted he would be angry if someone dumped waste on land where he lived, but claimed he was unaware it was illegal to do so.

Speaking after the case, Councillor David Lancaster, lead member for environment, neighbourhoods and community safety, said: “How can anyone think it’s right to dump waste in the middle of a street when it could and should have been taken to a waste recycling centre baffles me.

“I hope this case sends out a strong message that fly tipping is not acceptable in Salford and we will not hesitate to prosecute offenders using CCTV evidence or information from the public.”