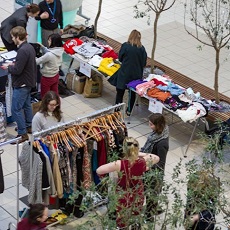 Humans of MMU – The Environment Team

“It wasn’t something I was brought up on… I grew up in the country,” he says.

Ryan wasn’t introduced into sustainable living until he went to university. He studied Business Studies at MMU but just didn’t connect with the course. That was until he began a unit called ethics, which included, you guessed it… sustainability. Now, you might be reading this thinking ‘what does that mean exactly?’ Well, I’ll tell you.

According to Wikipedia (I know your years of Harvard Referencing are probably kicking in and telling you to disregard everything I’m talking about but hear me out) sustainability “is the capacity to endure; it is how biological systems remain diverse and productive indefinitely.” Which basically translates to, harvesting what Mother Nature has given us but keeping the planet going, keeping it alive.

MMU is the third most ecologically friendly or ‘green’ university in the country, so the folks behind that must be pretty impressive. I found Ryan behind the scenes of something called a popshop. It’s where you bring in old clothes in exchange for a token and you can use that token to buy something that someone else has brought in.

It’s one of the many things MMU does in order to be more sustainable. I saw on their website that they only use fish caught from sustainable fisheries in their cafes and canteens and there are recycling bins and signs all over campus.

However, there is always something more that can be done. Did you know that 51% of all greenhouse gas emissions, the stuff that traps the heat under the ozone layer, comes from animal agriculture? Neither did I until I read it on a pamphlet on a British Airways flight to Houston, of all places. This discovery led to various documentaries being made, the most well known and most debated being Cowspiracy. Alisa McConnachie-Folwell, who works with Ryan, thinks this is something the university should be more aware of.

She said: “There could be more vegan options. Jacket potato and beans… thanks!”

In case you haven’t been swept up in the whole Cowspiracy debacle I will give you the lowdown. Cowspiracy controversially claims that you cannot possibly say you want to save the environment when you consume animal products. Very controversial. Alisa became vegan in early August.

“I watched (the documentary). I also went to a vegetarian conference too where they talked about the health benefits of veganism,” she said.

I should explain: there are vegan options available at the university but they are very limited. “They should do a meat-free Monday!” Sustainability is something that’s only going to become more and more important in our lives. It’s fantastic that universities are so involved in helping the cause.