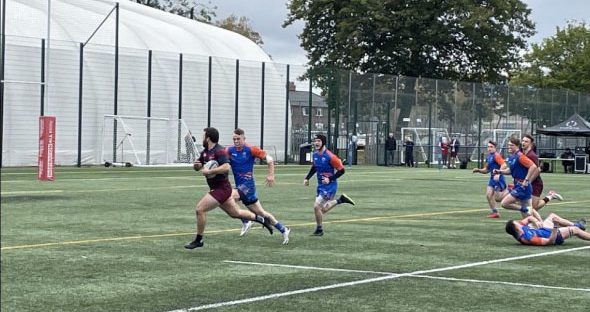 Manchester Met Rugby 1st XV suffered their first defeat at Platt Lane as they slumped to a 14-21 loss against a strong Strathclyde side.

The visitors racked up a 14-0 first half lead with three penalties and an interception for a try by Scott Briggs.

Man Met’s Josh Lugsden forced the ball over the line to score in the 43rd minute and Harry Matthews converted to make the score at the break 7-14.

In the second half Man Met grew in confidence but handling errors and a determined Strathclyde defence repulsed every attack, apart from a lovely try by Tane Bentley after a well-worked setpiece ten minutes from time.

Manchester Met coach Rob Jones was disappointed at the defeat in his first competitive game with his new side, weakened by six first-teamers out with injury and Covid.

“It‘s a strange feeling to have lost for the first time at Platt Lane and it isn’t a nice one,” he said.

“This hasn’t happened since we started playing here. Strathclyde were strong in the contact area and in the tackle, which is where the game was won really.

“We gifted them nine points with the penalties, we gifted them a try, we didn’t get the tackles in and we need to work on that.

“This is a young team and we have a lot to learn. We’ll analyse the film and identify the areas to work on but together we’ll grow as a team and come back stronger.”

Strathclyde University’s coach and director of rugby Gary Strain was delighted to get his first win against Manchester Met.

“I was pleased with our performance. We were on top in a lot of areas in the first half and we made that dominance pay,” he said.

“Our decision-making was good and the forwards performed well against a very strong Man Met pack.

“We expected them to come back strong and they did, but we had enough. I’m very pleased.”