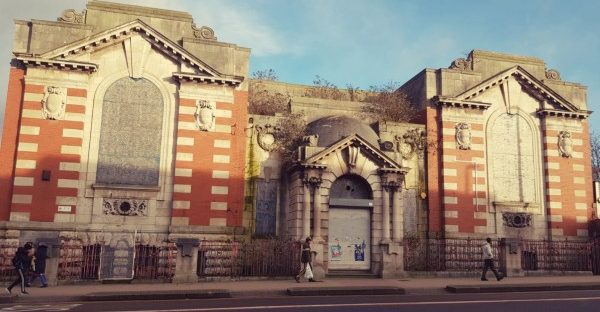 Cheetham Hill is one of the most diverse suburbs in Britain, comprising of different cultures, races and religions.

It consists of different communities such as Irish, Jewish, Caribbean and Asian settlers. It is located to the north of Manchester city centre and the area is humming with different restaurants, takeaways, fabric shops and groceries.

Cheetham Hill is home to many historic buildings and different religious centres.  In a short distance churches, mosques, Sikh temples and Jewish synagogues can be found.

Later, it was an extension to the nearby Cheetham Town Hall, but today is home to Kacoo fashion retailers.

The historic shul is the Higher Crumpsall’s and Higher Broughton’s Hebrew Congregation which was opened in 1928.

It was famous for its cantilever lady’s gallery as well for its chazan and choir, which are performed throughout the year.

In 2018, the historic 900-seat synagogue changed ownership when the Yeshivas Sha’arie Chaim had bought the shul and property.

The old Crumpsall and Cheetham District Library and railings

This grand old library was rendered as the local library and was built in 1909.

The Grade II* listed building was closed after the development a new library nearby. However, many petitions had been raised to try and save the red brick and white limestone building for posterity.

Apart from historic buildings, Cheetham Hill consist of different religious bases in such a short expanse.

Cheetham Hill is such a diverse street and home to different communities such as Christians, Muslims, Sikhs, Jewish etc.

St Chad church is a Roman Catholic church which was constructed between 1846 and 1847. St Chad’s is the Catholic mother-church of Manchester, tracing its origins back to the 1770s.

This newly-renovated mosque serves as a religious centre for all Muslims. It operates under the headship of Qamar-uz-Zaman Azmi by the Ibadur-Rahman Trust.

It is one of the largest Muslim centres in Europe. Building work began in 1975 but it has recently undergone restoration.

In 2000, Central Gurdwara came into being after a long search by the Sikh community for a permanent place for worship.

Over the years the gurdwara has expanded and has become a sign of brilliance where advancement of Sikhi and encouragement of younger generation to get involved in Sikhi is the primary target of the organisation.

This Grade II* building was completed in 1874. It tells the history of Jewish settlement in Manchester over the last 200 years.

The museum is currently undergoing restoration, after winning a £2.9m lottery grant.

Victorian buildings play a significance role in the prosperity of city. Victoria Rathmill, the assistant curator of archaeology, said: “Manchester is home to numerous listed buildings, many of which are still used today.

“Typically, the listed buildings in Manchester have a municipal, ecclesiastic or other cultural heritage. Some of the most notable buildings include the former Bank of England, Prestwich Union Offices, John Rylands Library, Liverpool Road railway station, and Manchester Town Hall.

“The buildings which don’t have a specific function, such as the warehouses and cotton mills of Ancoats, have typically been turned into accommodation or music venues over the years.

” As someone who grew up in Manchester I think if there are buildings within the city from the period which haven’t been restored or renovated, then they should be. Restoration and renovation will preserve Manchester’s history as the first industrialised city.”