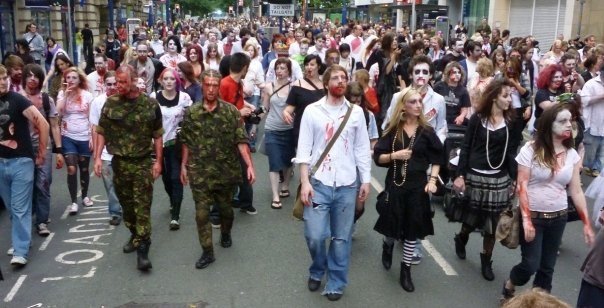 Manchester is set to increase its level of spookiness this year with a wide range of eerie events taking place in the city.

The annual Halloween Parade is returning for its eighth year, which will see thousands of zombies staggering through the streets of Manchester.

All manner of ghouls, ghosts and creatures of the dead will meet at The Printworks ahead of the 6pm start.

Many of the bars and restaurants in the complex will be putting on special offers for those taking part in the scare-walk, where you can mingle with the likes of Frankenstein and blood sucking vampires.

Only those in fancy dress will be allowed to walk in the parade, so get out your fake blood, attack one of your shirts with a pair of scissors and practice your best zombie shuffle.

Ellie Thomas, 22, a student from Manchester, attended the parade last year. She said: “It really is a lot of fun. The atmosphere is great because there are so many of you, I’ll definitely be going again this year.”

Pre-registration is recommended as only 2,500 creatures can participate, and this can either be done from 4pm at The Printworks Pump Yard area or online at The Manchester Halloween Parade’s website.

Registration costs £2 per person and 50% will go to The Halloween Parade's chosen charity.

If you’re looking for something different this Halloween, then join Illuminaughty as they honour those who have passed on to the other side in their extravagant Day of The Dead Festival

Set in Bowlers Exhibition Centre, Trafford Park, the Day of The Dead inside festival combines Cirque De Soleil performances with The Walking Dead style plots. Blend that with world famous DJs such as Caylx & Teebee, plus fairground rides and you are sure to experience a Halloween like no other.

Goblins, stilt walkers and fire breathers will be entertaining revellers while they dance to the best psytrance, drum and bass and reggae music being played across 5 arenas.

The chaos starts at 8pm on Saturday 29 with celebrations and carnage not expected to end until 5am.

For those who still have life in them, you can carry on dancing through the sunrise with DJ’s Outside the Universe, Neutrino, Kallima and more at the official after party.