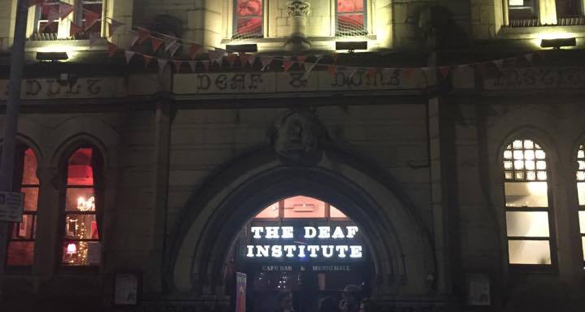 Deaf Institute really was the perfect setting for this odd little performance. This small but very interesting building that you can find on Grosvenor Street, wedged between the footage pub and a takeaway, is characterised by its grand stone entrance on the outside and quirky décor inside.

I started the night like any other gig. I walked over to the bar and purchased a bottle of slightly warm beer and made my way into the crowd. It was clear to me that I stuck out like a saw thumb. With my flashy white trainers and puffy looking road man coat I couldn’t help but feel left out from the van wearing, ripped jeaned, piercing filled crowd.

As the room prepared for the night to begin, it was hard to feel a sense of excitement in the air. Oyama, an Icelandic band whose neo-psychedelia sounds are entwined with a heavy indie rock vibe, were up first. The female lead vocalist was the highlight of this act but unfortunately for her, the crowd gave little more than the occasional head nod and seemed glued to the spot for the entire performance.

Next on stage came Fog Lake fronted by Canadian singer/songwriter Aaron Powell. With a slightly more upbeat sound that surely had to bring a bit of life to this seemingly asleep crowd. But, the small head movements Oyama had been gifted with had only turned into a gentle nod of acceptance and yet again the band performed but the crowd did not.

So it was time for the main event and as the room started to fill it was clear that the people wanted one thing, Foxing.

As the band from St Louis, Missouri, entered the stage, for the first time tonight the crowd seem to show signs of life. Front man Connor Murphy wastes no time and opens the set with the popular song Inuit. It was instantly clear that Foxing knew how to put on a show, jumping around and throwing their guitars about like they had something stuck to the end of them.

Connor Murphy put on a classic performance as he twisted and turned, wrapped himself in the microphone cable and occasionally pulled out a trumpet to help play some incredible Instrumentals.

The offbeat, atypical rhythmic structures and oddly time signatures, engaged the audience as the atmosphere started to build. During the fourth song, Connor Murphy and his trumpet make their way down into the crowd and entices them into a mosh pit frenzy. Finally, the madness begins.

Toward the end of the set, Connor Murphy told the crowd: “It’s good to be back in Manchester and not in America right now. I think you can feel for us after Trump was elected. It’s nice to be here with you and listen and play music”.