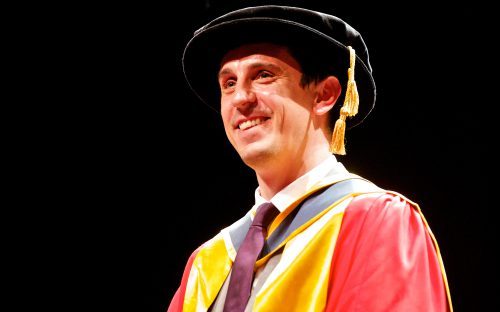 Gary Neville, brother Phil, Paul Scholes and Ryan Giggs – who formed part of famous Class of ‘92 – are reported to be opening a university in Manchester.

The former Manchester United players are in talks with Lancaster University and have identified a possible site Stretford, Trafford.

The  university will reportedly be called the University Academy ‘92, or UA92 for short.

Reports have suggested they are looking at potential sites for their university on Chester Road, a stone’s throw away from the stadium that made them household names.

In collaboration with Lancaster University, UA92 will specialise in sports but will also feature subjects such as physiology, sports management, and business.

A Lancaster University spokesperson said: “We can confirm that we are discussing this project with Gary Neville, but we are still evaluating its feasibility and no decision has yet been made to proceed or otherwise.”

TV pundit Neville has yet to give much away regarding the idea, stating: “I have been working on an exciting educational project but by no means is it ready to speak about in detail.”

The Class of ’92 refers to Manchester United’s FA Youth Cup winners in 1992, who later went on to form the backbone of the club’s successes during the 90’s and 00’s.