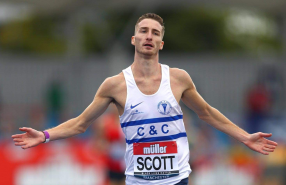 MMU athletics coach Steve Green has predicted a bright future for the university’s athletes after four runners reached the finals of the Muller British Athletics Championships at Manchester’s Regional Arena at the weekend.

MMU graduate and twice British 5,000 metres champion Marc Scott took a gold medal, while promising 200 metre sprinter Sanchez Nguie clocked in less than a second behind the winner. In the 400m final Kevin Metzger finished seventh in a strong field while there was disappointment for Rachel Bennett, disqualified in the 200 metres for a lane infringement.

Marc Scott smashed the stadium’s record for the event finishing first with an outstanding time of 13:32:98. It’s the latest of many impressive performances by North Yorkshire’s 26-year-old MMU graduate, who broke legendary Olympian Mo Farah’s indoor record of 13:09:16 in 2017.

Former triple-jumper Kevin Metzger finished seventh in the men’s 500m finals at the championships. Metzger, one of the senior competitors in the event, finished with a time of 47.44” which fell less than a second behind first-placed Alex Knibbs, who set a personal best of 46.65” with a strong finish. Metzger has switched to 400m from triple jump this year and has a very successful record at university championships.

Coach Green said: “This was a really strong MMU showing and these four athletes did us proud. There’s more to come too – there’s a cohort of six to a dozen athletes knocking on the door at British trials in other events. It’s such a pity the BUCS events won’t be happening this year.

“Marc’s had a great six months, breaking the British record indoors, then running a UK-leading time on the road. He won pretty comfortably, and it was great to see that. Kevin’s in his first year in the 400 metres and he’s never raced against such a tough field, so he’s done really well. He’s gaining experience and it was pretty close. It’s a step up in quality and making the final is a wonderful achievement.”

It was a championship to forget for Rachel Bennett as a lane infringement resulted in her disqualification from the women’s 200m final.

“Rachel’s a newcomer with us and she finished second in her heat,” said Steve.  “She was unfortunate to be disqualified. She was upset about it but she didn’t hide from it, and she’ll be stronger in the future. She showed a lot of character and it was a great achievement. Stepping on the line didn’t give her any advantage but unfortunately that’s the rule and it was applied.”

Hannah Williams took first place with a time of 23.95 seconds, a second ahead of Kate Stainton in 25.01 seconds.

Steve Green was encouraged by the sprinter’s showing at this level in what has been his first season as a senior, badly disrupted by the Covid lockdown.

“To make the British final is a big step up for Sanchez and it shows a great deal of maturity to cope with lockdown and stay fit, performing close to a personal best. We’ve got really high hopes for him and we’re really glad he’s with us at Man Met. He’s a very ambitious guy and he has targets to hit and a lot to aim at but he’s a very talented guy –  so let’s see how he develops.”