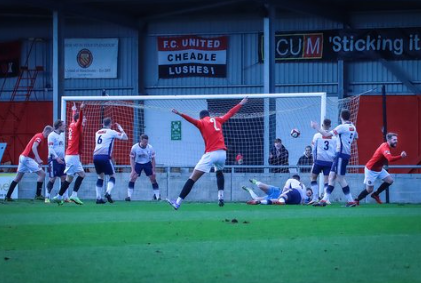 FC have made it back to back games without loss as the points were shared in their 1-1 draw with Matlock on Saturday at a sunny Broadhurst Park.

The Reds hit the front early on with a brilliant goal from Ali Waddecar putting the home side one up inside just 6 minutes. FC would dominate for the rest of the first 45 minutes, as they have many times this season. Slick passing play has been the hallmark for FC this season, and with Matlock struggling to get any sort of foothold in the game, FC looked certain to capitalise on their dominance.

Poor discipline from Matlock led to a poorly timed challenge on Adam Dodd, and this led to a melee in the middle of the field which would spill over at half time as both dugouts met. Matlock played some route one football at times and this presented threats to the FC back line, but they were marshalled well.

Going into the second half there was a notable absence from the touchline as Matlock manager Paul Phillips was sent off for his role in the half time fracas. However, this did not mellow the atmosphere as both sides looked to fight for all three points.

Ewan Bange was a standout throughout the game as he seemed to get on the end of every ball played forward, but it was his dribbling that was catching the Gladiators’ back line off guard.

New signing Jorge Sikora had an excellent game and was a real thorn in the side of Matlock as he was first to every ball and provided some excellent cross-field passes that added another dimension to the FC attack.

FC would be given another boost in the 73rd minute as the Gladiators’ Jamie Sharman would be shown a second yellow card for a cynical foul on Bange. The referee initially missed the challenge, but his linesman on the near side helped out and flagged for the foul.

It looked like FC had done enough to come away with all three points, and it nearly got better when Ewan Bange hit the crossbar in the dying embers after another brilliant run. What was to come after this would really hurt FC.

As 3 minutes were added on, Matlock broke down the field and got themselves a penalty as the referee judged that the attacker had been brought down by FCs last ditch defending. The penalty was converted by Alex Byrne and it was a sickener for FC as they levelled the game.

After the game, here is what FC Manager Neil Reynolds had to say –

You’d have to ask their manager what their game plan was but we’re a footballing side, we try to win football games but they are where they are for a reason so you have to give them credit for that. I’m immensely proud of our boys today and i thought we gave a really good account of ourselves.”

FC still remain outside the top five in the league, but there are things to look forward to as FC will play their first competitive European game at Broadhurst Park against AKS Zly in the Fenix Trophy on the 5th March.