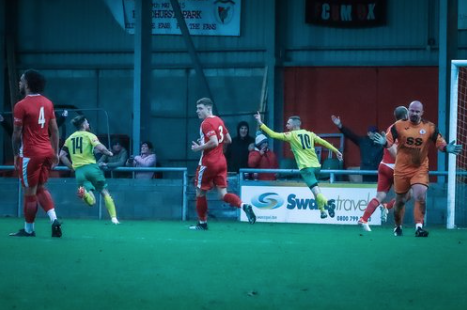 FC United have now made it four wins in four to lift themselves up to seventh in the Pitching-In Northern Premier League after a 4-3 win in front of a bumper crowd of 2,279 at Broadhurst Park on Bank Holiday Monday.

A penalty dispatched by captain Charlie Ennis, a clean strike from Michael Donohue and a brace from Joe Duckworth secured the points for FC, who took to the field in their eye-catching yellow and green away strip in support of Shelters ‘NoHomeKit’ campaign that is used to highlight the plight of the homeless in our society.

The Robins really made FC work for the three points, as they came from behind to equalise the game twice with goals from Liam Tomsett, and a brace from Florian Yonsian.

With usual FC ‘Keeper Dan Lavercombe testing positive for Covid-19 earlier in the week, FC drafted in former Ireland U-18 international George McMahon as an emergency signing. He asserted himself with a smattering of good saves and to say he has had barely any time with the squad, he settled in well, and quickly.

Ashton really did push for that third equalising goal in the closing minutes and FC was forced to cling on as the five minutes that were added on really seemed to drag. FC dealt with the barrage of pressure well and hung on to secure all three points.

This result leaves the Reds five points off the playoffs, and with an away trip at Radcliffe Borough next up on New Year’s Day, FC finds themselves in brilliant form as the feel-good factor certainly has returned.

Man of the Match – Regan Linney

Regan really did show in this game why he is one of the first names on the team sheet. His driving runs and fancy footwork made him a nightmare for the Ashton defence and all afternoon they struggled to keep a hold of him. Although not netting himself, he won the penalty to put FC one up, and he was very unselfish in squaring the ball for the 2nd goal, and he was instrumental in the other goals too.

“Everyone enjoys winning games of football. It’s a great feeling. We’ve been stood here this season where it’s been a bit doom and gloom especially after the Grantham defeat, but we knew it wasn’t far away, the turning point wasn’t far away. We haven’t been lucky with injuries and suspensions, but we just carry on, we have a great group of lads in there and I’ve never said a bad word against them all season and they’re showing teams now how good they can be.

Regan Linney is a fantastic talent, and there will have been a couple of scouts here today who probably weren’t here to look at him but have gone away wondering who he is because he is an amazing talent and at this level and the level above, I’ve no doubt he can go higher.

He’s enjoying that role, he’s levelling in that role, but his work rate was top, top drawer.”