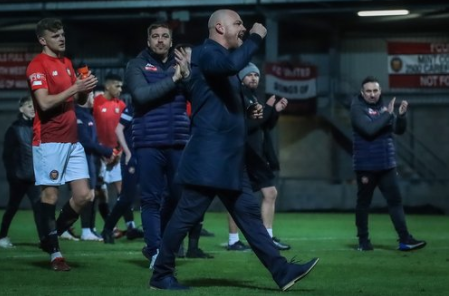 FC United make history beating Stalybridge Celtic at home for the first time in history and now the play-off places are firmly in the sights as they now sit 8th, six points off the top 5 in the Northern Premier Division.

An emphatic display from the reds ensured that all three points stayed at Broadhurst Park – with new striker Ewan Bange, signed in the week on loan from Blackpool having an immediate impact. Ali Waddecar floated a ball over for the new number 11 to drive a well-timed header past Liam Hughes in the Staly goal to send FC into a 1-0 lead on the eighteen-minute mark.

FC could not have had worse luck as new boy Ewan Bange went down injured on the 25-minute mark with a suspected muscle strain curtailing what had already been an impressive debut.

FC really began to turn the screw on their visitors as the first half wore on, with them gaining set piece after set piece, it was a wonder that the reds didn’t go in at the break with more goals on the board.

The reds emerged for the second 45 minutes seeming even more hungry to secure the three points, with Andy Halls getting forward and blazing a strike over the bar. The game became slightly scrappier in the next ten minutes, with challenges flying in from both sides.

A challenge on the ball by a Staly defender as FC were in on goal meant that the ball ricocheted up onto his hand and referee Stuart Morland wasted no time in pointing to the spot. Charlie Ennis took the penalty and smartly converted it into the roof of the net.

FC didn’t let up having gone up by two, with their pressing becoming more and more relentless, not giving their visitors any time to breathe. Staly did get in behind in the dying embers of the game and the ball was bundled over the line in a goalmouth scramble to prevent FC claiming a clean sheet. The goal from Raul Correia set up a slightly nervy finish with FC looking vulnerable for the first time in the game, but they weathered the storm to come away with the three points, and a sixth game unbeaten.

I spoke to FC manager Neil Reynolds after the game.

[On new signing Ewan Bange] “Everyone looks at his size and his presence and you think, are they going to change their style of play? One fan spoke to me before the game and asked if we were going to play more direct? Bange is 6’5 and he looks after the ball well, gets across his marker but it was all about the cross for me from Waddecar.

“We’re all delighted for him. We went through a transitional period in the first half when he came off, was it Linney or Waddecar that went nine and we had to tinker with a few things. We missed him when he went off, but we changed things at half time and nullified the absence.

[On focusing on counter attacking play] “We went to Bamber Bridge last week and we played with a compact unit and we worked this week on the defensive square and petting the front four rotate and come narrow and try to get our fullbacks out but were a threat going forward and we have lots of pace and talent on the pitch. It’s disappointing to concede at the end because I think the performance didn’t deserve a goal against us but that’s football, I’m happy we’ve won 2-1.”

Man of the Match: Ali Waddecar – his driving runs and brilliant crosses into the box ensured that FC were a constant threat going forward, and his awareness of his teammates meant that his passing game was simply unplayable.

Next up for FC is Whitby Town under the lights at Broadhurst Park on Tuesday 25th, in the re-arranged game that was originally due to be played back at the start of December last year.

Images thanks to Alicia Day