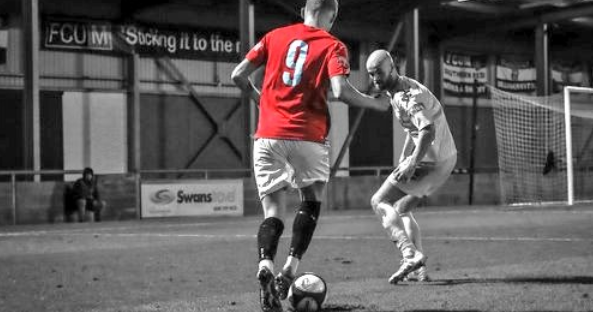 FC have taken a giant leap towards a play-off place last night as they came out 1-0 victors at Broadhurst Park in what was an incredibly hard-fought tie.

A brilliant solo goal from Regan Linney just after half-time was enough to seal all three points for the reds.

The game was frantic from start to finish as both sides fought hard to keep hold of the ball and to not give up any chances,.

FC knew the threat that the Dolly Blues side posed, and they certainly knew what sort of a threat FC can hold when they are on the warpath.

FC were brilliant on the counter attack all evening, and this was a real thorn in the side of Lancaster who looked to play more route one football all evening.

However, this was marshalled well by the FC back line, and especially Aaron Morris, who seemed to be first to every aerial ball and played excellently when dribbling away from defenders.

Some excellent saves from Lancaster ‘keeper Curtis Anderson prevented FC from steaming into a more commanding lead as he raced off his line on two occasions to smother the ball.

Last week, FC manager Neil Reynolds told FC fans not to ‘get giddy’ about the prospect of promotion. But this task is getting harder and harder for the reds faithful as we move up the table and the gap narrows.

The game would be marred by a succession of fouls as the game became scrappy again after the goal with yellows for FCs Halls and Griffiths and one for Lancaster’s Niall Cowperthwaite.

A nervy finish was to follow as the men in red looked to secure a second win in as many home games, but they held the late charge and came away with a well- deserved three points.

Tonight’s Man of the Match goes Regan Linney. I challenge anyone to find a better solo goal than that all season. It was a brilliant display all round and it was an absolutely deserved goal.

After the game, NQ spoke to FC manager Neil Reynolds, whio said: “We went in at half-time 0-0 but it was a real fight.

Q: What rocket did you give them players in the dressing room?

“I didn’t. The game plan worked. The training telling Charlie, the number 10 not to get involved too much with the attacking play. We told Galloway and Regan to stay wide. We did it in the second half and we just changed our shape a bit, getting our wide men into the pockets and it worked. Regan got his goal and we got the three points.”

Now we’re very much looking up the table towards the playoffs, you’ve always maintained that the goal stays the same. How do you stop that getting in the head of the players or yourself?

“It won’t. We’re a top 10 side who are on a good run of form at the minute and we know that they have a lot of spending power above us but we’ve given ourselves a chance.

“11 games ago we had 23 to play and we were down in 15th and people wanted us to get into the top 10. All of a sudden, that group of players have masterminded where we are now, one defeat in 11 and back to back clean sheets, they’re a great group to work with. ”

Next up for FC is a visit to Gainsborough Trinity on Saturday 12th February, a 3PM kick off.