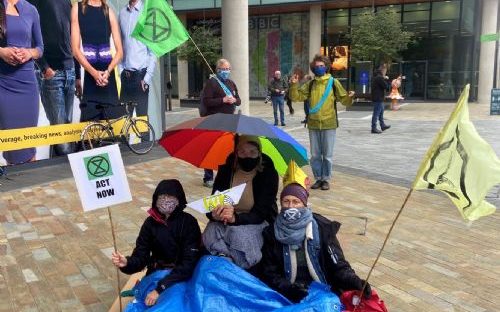 The self-proclaimed “rebels” of the environmental group occupied the entrance to the BBC Quay House on the central piazza at MediaCity in Salford, as speakers accused the news broadcaster of inadequate climate coverage.

Zoe Cohen of Extinction Rebellion (XR) Manchester, said: “The BBC are in such a powerful position to really tell the full truth, yet they repeatedly hide or downplay the scariest scientific findings and information.”

The Salford protest was part of a series of actions organised around the country by the climate group to call out big media outlets.

The previous day, XR activists barricaded the roads around News Corps Printworks presses near London and Liverpool with bamboo scaffolds and vehicles to disrupt the distribution of four national newspapers, including the Sun, and Daily Mail.

The government announced it would review the group’s status in law and move to classify Extinction Rebellion as an “organised crime group”.

Boris Johnson tweeted: “A free press is vital in holding the government and other powerful institutions to account on issues critical for the future of our country, including the fight against climate change.”

In response, Stephen Fry, Mark Rylance, and 150 other public figures signed a letter stating that XR are not criminals, but “a group of people who are holding the powerful to account”.

The letter underlines the “woeful lack of serious reporting on the climate and ecological emergency due to the billionaire owners’ vested interests, and a lack of understanding from reporters, to editors to senior executives, about the severity and scale of the crisis”.

The following Sunday, Extinction Rebellion released a statement outlining their intentions, stating: “We couldn’t agree more that a free press is vital to a proper democracy, and yet this is nowhere to be found”.

The group accuses billionaires like News Corp owner Rupert Murdoch of downplaying the urgency of the climate crisis to cover up exploitation of the natural world.

The controversy escalated amid growing consensus among scientists that the Covid-19 pandemic is largely the result of humans’ degradation of ecosystems.

Last week, the United Nations published its global biodiversity report, which concludes that of the twenty Aichi Biodiversity Targets set out in 2010 by 190 countries, to accomplish by the end of this year, only six have been partially met.